MAP15: Les comtes de la crypte is the fifteenth map of 3 heures d'agonie 2. It was designed by Jean Bon (Jambon) and uses the music track "Kerfautras," by Matmatah. 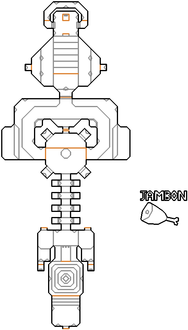 Map of Les comtes de la crypte
Letters in italics refer to marked spots on the map. Sector, thing, and linedef numbers in boldface are secrets which count toward the end-of-level tally.

* The vertex count without the effect of node building is 632.

"Les comtes de la crypte" translates to "the counts of the crypt". This is a pun on "Les Contes de la crypte", the French translation of Tales from the Crypt, playing on the homophony between "comte" (count/earl) and "conte" (tale).