MAP15: Life-Wrecking Center is the fifteenth map of Doom 2 Unleashed. It was designed by Paul Corfiatis and uses the music track "In the Dark" by Robert Prince, or "Midnight Strike" by James Paddock (Jimmy) when using the music WAD included with this megawad.

This level includes a secret exit to MAP31: Night of Fail. 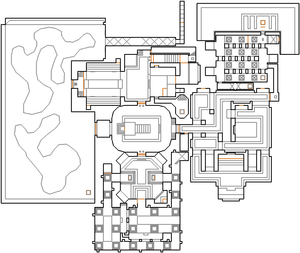 Map of Life-Wrecking Center
Letters in italics refer to marked spots on the map. Sector numbers in boldface are secrets which count toward the end-of-level tally.

Take the super shotgun in front of you then head east to a set of steps, killing two approaching Hell knights plus a revenant on Hurt Me Plenty (HMP) skill level or higher. Climb the steps and kill the mancubus at the top, press the gargoyle switch it was guarding then go down the steps and through the door that has opened ahead. Follow the passage until you reach a switch guarded by one or two chaingunners and flip it, which will lower a wall to the south-west hiding two or three demons. Follow a second passage behind this wall to another switch, also guarded by two chaingunners, and flip it - a wall will lower behind you revealing two knights and a revenant. Head north-west past a mancubus to a third switch protected by one or two chaingunners and flip it, then head due south into another passage. Go round the corner to find a set of steps leading up to the yellow keycard - watch out for the mancubus guarding the area on Ultra-Violence (UV) and Nightmare (NM) skill levels, and several demons that will be released as you approach the key.

Return to the starting room and go through the south door, which has yellow key markers above it. Kill the mancubus and two shotgun guys ahead then go to the lift by the south wall and flip the switch here to be taken down to a brick passage. Turn left at the junction ahead and follow the passage until you reach another junction, then turn left and flip the switch ahead. Go back to the junction and turn right to kill the approaching demons (plus two revenants on HMP or higher), then head south until you reach a wall. Turn right and follow the passage all the way to the end to find another switch, flip it then make your way back to the lift, killing more demons on the way. After riding the lift back up, turn right and climb the steps in front of you to reach the red keycard - approaching the key will lower three platforms behind you holding demons.

Return to the starting room and open the north door, which has red key markers above it. Kill the approaching zombies and demons then go through the door and turn right to see a lift protected by several monsters, including two cacodemons and a revenant on the ledge above. Kill the monsters then ride the lift up and follow the ledge round to a switch, which will raise a bridge over the nukage pool to the west. Drop off the ledge and head west over the bridge to find the blue keycard, pick it up and cross the bridge again to find that a mancubus and imps have been revealed on your left, as well as a pain elemental on the ledge ahead.

From the bridge, head north-east and go through a door with blue key markers above it. Go down the stairs and kill the waiting chaingunner, then go round the corner - the left-hand wall will lower and reveal demons and spectres, so step back to avoid being trapped. After clearing the way, follow the passage to a metal wall and press it to lower the wall and return to an earlier room, where part of the floor has lowered to reveal an arch-vile. Kill it then head through the south doorway and follow the passage to a teleporter surrounded by ammo boxes. After stepping into the teleporter, follow the winding path past some zombies through three damaging blood pools to reach the north wall.

As you approach the exit sign, a wall will lower in front of you to reveal two to four barons of Hell guarding a switch. Flipping the switch will open the door next to the exit sign and release two arch-viles, one of which will be teleported to the blood pool directly south of the door. Fight or avoid these monsters, then go through the door and step on the white teleporter pad to finish the level and proceed to MAP16: The Spooked.

Refer to secret #5 below for information on reaching the secret exit to MAP31: Night of Fail.

From the eastern switch in the red key room, head north to find a berserk pack in a dead end.

The following weapons and items appear in deathmatch: