MAP15: Nukage Zone is the fifteenth map of TNT: Revilution. It was designed by D_GARG and Micah Petersen (Jaws in Space), and uses the music track "Tell No Tales," by Brendan Bradley (Bucket). The par time is 3:00. 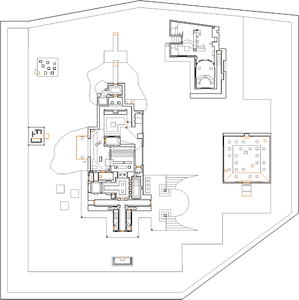 Map of Nukage Zone
Letters in italics refer to marked spots on the map. Sector numbers in boldface are secrets which count toward the end-of-level tally.

There is a second blue key door on the gray walkway to the southwest of the main building. Within it is a switch flanked by two tiny monitors displaying question marks. Hitting this switch opens the big door at the south end of the computer room where the blue key is found. Head to that location, climb either set of steps and hit the long red switch in the center of the booth to be sent to the first secret level, MAP31: Anubis.

* The vertex count without the effect of node building is 1813.