MAP15: Ravine of the Hated is the fifteenth map of Unholy Realms. It was designed by Brian Knox (Snakes) and uses the music track "Death & Decay," composed by John Weekley (PRIMEVAL). 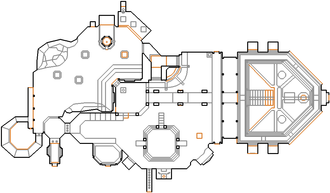 Map of Ravine of the Hated
Letters in italics refer to marked spots on the map. Sector numbers in boldface are secrets which count toward the end-of-level tally.

Secret Exit: To reach the switch in the south central part of the map, you need to remove eight barriers. Each of these barriers opens up once you do the following:

* The vertex count without the effect of node building is 1307.