MAP15: Screams aren't a crime... yet is the fifteenth map of Valiant. It was designed by Paul DeBruyne (skillsaw) and uses the music track "Goin' Down the Fast Way" from Rise of the Triad, composed by Lee Jackson. The par time is 10:00. 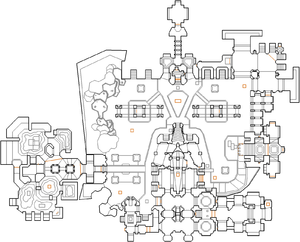 Map of Screams aren't a crime... yet
Letters in italics refer to marked spots on the map. Sector, thing, and linedef numbers in boldface are secrets which count toward the end-of-level tally.

As soon as the level starts, some super imps, super demons, shotgun guys and suicide bombers will start teleporting to the corners of the room - take the supercharge and rocket launcher in front of you (along with a shotgun on the starting pad) to help fight them off. Flip the switch in the south-west corner to open the nearby door and kill two revenants waiting behind it, then go through and turn left to head towards two shotgun guys guarding two armor pickups. You will see a lift in the east wall - activate it to get a super chaingun, then ride the lift up and flip a switch at the top to reveal a new chamber with chaingunners, bombers, pyro knights and super demons to your right. Go through the doorway in the south-west corner and step on the lift ahead of you to go down one level, then flip the lever in front of you to lower a pillar to the north holding the red keycard. Watch out for some arachnorbs that are revealed to your left as you flip the switch.

With the red key, return to the starting room and open the locked east door, then climb the steps on your right up to a ledge with two mancubi. Head east into a room with a megasphere (bars will rise near the entrance to block your escape route), equip the super chaingun then flip the switch on the east wall to lower it and get the yellow keycard; this will also allow a horde of zombiemen and bombers to teleport into the room, so use the chaingun to mow them down. Once the enemies stop teleporting in, pull the two switches in the north and south antechambers along with two more switches that have been revealed in the main room, which will lower the bars blocking the entrance.

Go back to the starting room and head through the west door again. This time, head west across a bridge and press the striped wall on the other side (requiring the yellow key), which will lower to reveal a pyro knight guarding a partial invisibility. Head west past two booths containing chaingunners then north into a room with zombies, imps and an arachnotron, then go to the south-west corner of the room to find a lift that you can activate by pressing it. Kill any waiting zombiemen then ride the lift up and go forward into a second room with more zombies, then go to the south-east corner to find a switch guarded by a chaingunner. Flip this switch to lower a pillar to the north holding the blue keycard then drop down to the floor below to collect it; prepare yourself as this will open numerous closets containing chaingunners, along with an arch-vile to the north.

Use the lift to get back up to the south room, where you will see that a doorway in the north wall has opened. Go through it and press the button in front of you to raise two bridges leading to the booths you passed earlier; inside the east booth is a circular switch that will re-open the entrance to the blue key area, but approach with caution as it will also release two bombers and some chaingunners. Go back outside and head north to a V-shaped nukage pit; on the north side of this pit is a blue key door that you can open to find the exit teleporter leading to MAP16: Toxic Traverse.

To access the secret exit you need to flip four switches that have "LOCKED" signs next to them.

After flipping all four switches, go through the doorways on either side of the door leading to the normal exit to find that four sets of bars have opened. Drop into the hole at the end of the passage to go to MAP31: Cyberwar 7734.

* The vertex count without the effect of node building is 4935.