MAP15: Secluded Stronghold is the fifteenth map of Bloodstain. It was designed by Pavel Tvrzník (Pipicz) and uses the music track "Dracoid Ruins Battle," from Lands of Lore: Guardians of Destiny. 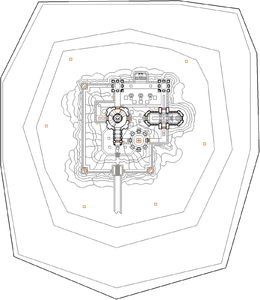 Map of Secluded Stronghold
Letters in italics refer to marked spots on the map. Sector, thing, and linedef numbers in boldface are secrets which count toward the end-of-level tally.

Teleport destinations 66 and 69 are only flagged for Ultra-Violence or higher, meaning that the teleporters they are on do not function on lower skill levels.

* The vertex count without the effect of node building is 3584.