MAP15: Spawning Vats is the fifteenth level of console versions of Doom, based on the original E2M7: Spawning Vats with modifications made to adapt to the consoles' limitations. The conversion was performed by American McGee, and the original authors of the map are Tom Hall and Sandy Petersen. The map first appeared in the Atari Jaguar version, and was later used in the 3DO, Sega 32X, Game Boy Advance, Sony PlayStation, and Sega Saturn versions.

In the 32X version, which is missing all of the levels from Inferno, Spawning Vats serves as the penultimate level. In the PlayStation and Saturn versions, it contains an added secret exit to MAP55: Fortress of Mystery. 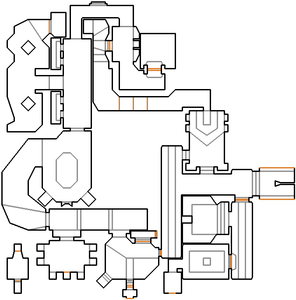 Map of Spawning Vats
Letters in italics refer to marked spots on the map. Sector, thing, and linedef numbers in boldface are secrets which count toward the end-of-level tally.

Go through the door in front of you and turn right and then right again. Go through the door on your left, then turn left and follow the corridor. Go up a lift and continue following the path until you reach a ledge holding the yellow keycard.

Drop off the ledge and go straight forward through the doorway in front of you, then turn left and you will see the yellow door in front of you. Go through it and open the door ahead of you on the right-hand side. Go round the platform holding the red keycard and through a small passage to a room with a switch. Press it and return to the previous room, where the platform has lowered so you can take the keycard.

The PlayStation and Saturn releases add a secret exit to MAP55: Fortress of Mystery, which can be reached after getting the red keycard. After getting the keycard, follow the guide above to the exit area, but instead of opening the red door go straight ahead, then turn right, left and left again. You will enter a room with a number of square nukage alcoves. Step into the central alcove to be teleported to a small room containing lava and one or two demons. Behind them is a gargoyle switch with megaarmor behind it, which requires the red key to open.

As you walk up to the gargoyle switch, you will hear another door opening nearby. Use the teleporter here to return to the previous room, then turn around and you will see a skull switch in the alcove on your left. Press it before the wall shuts again to reach the secret level.

The second door you find in the level has a staircase behind it going south and north. Go north and you will find a chaingun at the top.

The rectangular hallway near the center of the hallway has an invulnerability powerup at its south end. The item is protected by a baron of Hell on all skill levels.

From this hallway, you will see an opening in the west wall between the windows. Go through here to a tall room with wooden pillars. This room has a box of shotgun shells by its south wall, and armor by the northern pillar.

There is a corridor in the north west of the map, which connects the north tunnel, lava pool room and the tall room to the west altogether. The corridor has four windows, of which the two to the south are geometrically invalid: the sector that connects the "sky sector" and the two inlet sectors lacks a one-sided wall making the middle sector unclosed. This does not cause rendering distortions though, and was fixed in the PlayStation port by leaving only two windows in total.

Two hanging legs (one being in the starting room and the second being in the southern nukage pools room) have no flags set for any skill setting, so they are never spawned in the level. In Sony PlayStation and Sega Saturn ports they have been both removed.

Spawning Vats is one of the most radically altered levels on console releases, with over half of the playable area removed. Texture changes throughout the level give the impression of an entirely hellish environment, rather than a UAC structure with hellish influences.

This map is one of several in the Jaguar level set which relies on a modification made to the Doom rendering engine that fills in any missing textures with the first texture specified in the texture directory. In the case of the Jaguar, 32X, 3DO, and Game Boy Advance ports that is the texture ASH01, which happens to match the texture theme of this level. If the level is extracted from any of these ports and played with the PC version of Doom, hall of mirrors effects and bleeding flats can be observed in various locations as a result.

The Sony PlayStation's rendering engine changes this again, in a way which makes any visible unspecified textures on sidedefs cause undefined behavior, so the PlayStation and Saturn versions of this map repair all of the missing textures by explicitly specifying them as ROCK01 (which is a redrawn equivalent of ASH01).