MAP15: Spook House is the fifteenth map of 1 Monster. It was designed by "sausage" and Robert Eckhardt (Ichor), and uses the music track "Double, Double, Toil and Trouble" from Blood.

Like all maps in the megawad, the map features only one type of monster, in this case the spectre. It is set in a Gothic horror-styled mansion (with liberal use of textures from the Blood Resource Pack), full of dark secrets and ambushes by the invisible beasts. The map contains a secret exit to MAP31: Castle Dorkenstein.

"Spook House" is a difficult map, as ammo is scarce, health even more so, and most of the level is dark and gray, making the monsters hard to see. It is important that the player moves carefully and avoids getting cornered, preferably retreating to previous locations to take out the crowds more safely. For the first half of the map, a useful trick in tense situations is to retreat to the front porch where the player begins the level; the spectres cannot leave through the front door, allowing the player to shoot or punch them with impunity.

All of the armor bonuses and health bonuses on the map are actually stacks of several of the items on top of each other. 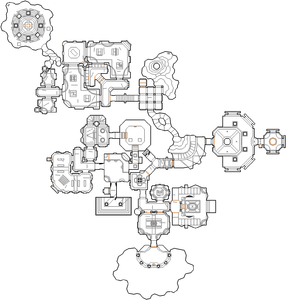 Map of Spook House
Letters in italics refer to marked spots on the map. Sector, thing, and linedef numbers in boldface are secrets which count toward the end-of-level tally.

Enter the house and head left, to the library area. Press the switch to the south-west to open two doorways which lead to a staircase. Head upstairs. In the dark pit, press the switch to lower the barriers blocking your way, then head forward and pick up the red key. Return to the house's main hall and open the red door.

Enter the dining room and head to the outside area. Press the switch here to open a door to the east of the small hallway. Go there and descend downstairs to find the yellow key. Head back to the red door; there is a yellow key door nearby. Open it and head forward through another door, then descend down into the dark caverns. Enter the opening to the north and press the switch here to open the bars that block a passage to the west of the cellar. Head in there.

Press the switch to the northwest of the laboratory. This will raise the bars that block the way into a small room in the middle of the area, where you will find the blue key. Pick it up, leave the laboratory and head out of the cellar, back up the stairs where the blue key door is.

Enter the blue door. Wait for the floor to lower and you will see the passage to the exit, which you can enter once the bars lower completely.

In the area beyond the red door, there is a study where you can find a chaingun, two clips, 4 shotgun shells and four (Easy), five (Medium) or seven (Hard) health bonuses.

A teleporter just before the exit portal leads back to the earlier part of the level.

* The vertex count without the effect of node building is 4980.

The map was originally left unfinished; the majority of it was created by Eckhardt. About the only part of the map left intact from sausage's original work was the front hall.