MAP15: Stairway to Hell is the fifteenth map of Cleimos 2. It was designed by Rand and Steven Phares. 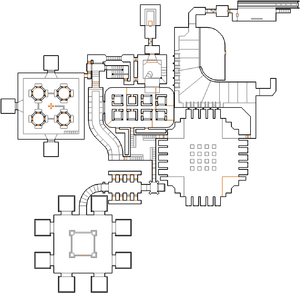 Map of Stairway to Hell
Letters in italics refer to marked spots on the map. Sector numbers in boldface are secrets which count toward the end-of-level tally.

Secret exit: Press the switch near the blue key, jump in the nukage and head north to go through three locked doors and a fourth door - ahead is the switch to MAP31.

* The vertex count without the effect of node building is 2303.