MAP15: Temple of Water is the fifteenth map of Whispers of Satan. It was designed by Paul Corfiatis, who also wrote the music track for this level, "Viola Villa". 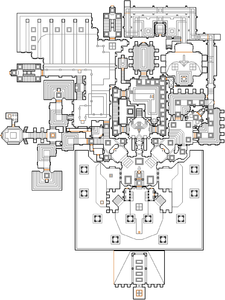 Map of Temple of Water
Letters in italics refer to marked spots on the map. Sector, thing, and linedef numbers in boldface are secrets which count toward the end-of-level tally.

Approach the door and go up both side staircases and press the switches in the side rooms to open the entrance of the building. Press the switch to reveal enemies surrounding you. The yellow door path is to the left while the red door path is to the right. For now, take the northern path to find the yellow skull key on top of a fountain. Flip the switch in front of it to open the left door, and go through this door to the next one. In this watery area, a switch is dead ahead, along with an arrow pointing right. Flip the switch, then return to the yellow key room to find that the other door is open. Go through it to be on balcony level. If you want the secret exit, follow the instructions for Secret #2. Otherwise, continue across the balcony to the door. Kill the mancubus inside and press the switch to reveal several lost souls around you. Return to the yellow key room and obtain the yellow key, then return to the hub to take the yellow door path now.

Open the yellow doors and you will see the red skull key behind the bars in a small room. You can go either north or west. Go west first through the door. Kill the imps in front of you, and notice the vines blocking way to the section with the waterfall. To open this section go through the path to the left and kill the imps here, then open the door and kill the arachnotron guarding the switch. Flip this switch to lower one set of bars guarding the waterfall here. Now go to the other path you saw when you came in, ignoring the path to the right and going through the door slightly to the left. Flip the switch there to lower the other set of bars so you can access this area. Go down the stream here to the room with a mancubus and chaingunners, then flip the switch. This switch has red markings around it, thus, it removes one set of bars from the red skull key. To open the next set of bars, go back to the path to the east that you ignored to emerge in a very large open area with red torches and a walkway. Head north and west, staying on the walkway, to the next door. Behind this door are some chaingunners and a revenant (on Ultra-Violence or higher) guarding the switch. Flip this switch and return to the walkway to find another one is rising up, allowing access to the northeast door. Enter this door to find a similar setup. Flip the switch here to remove the second set of bars guarding the red key. Now head for the door to the southern end of the walkway area to reach the hub where you can get the red key (guarded by an arch-vile). Return to the main hub and take the red door path.

Behind the red doors, you will find several zombies, as well as an arachnotron guarding blue bars which coorespond to the normal exit. Take either door here and follow the path to the lift, then flip the switch to ride downwards. Simply follow this path all the way until you find the blue key. When you pick it up, several cacodemons will emerge, as well as other monsters in the watery caverns you traversed. Head back to the set of bars you just passed and hit the switch inside so you can leave this area. Take the lift back up and then look out for lost souls and the arch-vile as you open the blue bars to the normal exit.

* The vertex count without the effect of node building is 5615.