MAP15: The Devil's Coterie is the fifteenth level of Memento Mori II. It was designed by Adam Windsor and uses the music track "Frivolous Encounter" (now called "Shades of Life") by Mark Klem. It contains a separate area for multiplayer competition.

One of the first areas to be overrun by the Demons in this latest infestation was an old UAC industrial and storage facility. We managed to have some reconnaissance pictures taken of the exterior, the clearest of which has been provided for this briefing. Although at that time the Demons were keeping out of sight, and we were unable to get any hard data on their numbers or strength, recent long range scans suggest significant infestation, and energy discharges matching those of teleport units in action have been detected. We anticipate a very hot reception for you. Watch your six, and don't be caught napping - there's no telling what traps the Demons have in store. 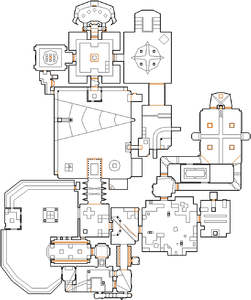 Map of The Devil's Coterie
Letters in italics refer to marked spots on the map. Sector, thing, and linedef numbers in boldface are secrets which count toward the end-of-level tally.

Those more familiar with Windsor's latest works will know him for his smaller and compact maps. This map, however, is bigger and far trickier, designed around enemy setups that are not easy to handle. Fortunately, the secret exit is very near to the regular exit and does not require any sequence of actions to be accessible - all that is needed is knowledge of where it is.

You begin in a small room with windows to either side. You will almost immediately come under fire from enemies from a courtyard (through the window to the right) and from a brick room (window to the left). Grab the shotgun, box of shells and medikit (if needed), then quickly move forward to get out of their line of fire. Head down the steps and prepare to enter the brick room you saw earlier.

Near the entrance of this room are up to three barrels (not present on Hey, not too rough and below). You probably should carefully blow them up before proceeding further. This action, however, is likely to attract a horde of former humans of all sorts, along with a lone imp. Six lost souls (Hey, not too rough and below) or a pain elemental (Ultra-Violence and above) are likely to wander in too. Monster infighting may be your only solution here if playing from a pistol start.

From this brick room, head into the corridor between the two skull-adorned pillars in the north. Kill the two imps here and grab the armor. Open the UAC door to the west to reveal a long hall with two chaingunners, two shotgun guys (zombiemen on Hey, not too rough and below) and a revenant. Clear them out, that head down the hall into the courtyard you saw earlier.

This courtyard is infested with enemies. Imps will snipe you from the fence, while the floor is infested with arachnotrons. You will also find a cacodemon, two zombiemen and a revenant to round off the monsters here, which you may or may not have dealt with while clearing out the long hall. Either way, your best option is to make a dash for the grey brick structure in the west, kill the chaingunners here and grab the rocket launcher, which might help kill the arachnotrons faster. Once done, grab the blue key from under the structure in the north.

Backtrack to the brick room. Go through the door in the east, then head north. As you approach the metal corridor, parts of its walls will lower to reveal red walls (this is purely cosmetic - no traps are present). As you enter the next room with STAR textures, clear out any former humans on the platform in the west and watch for barrels (including two near the entrance, not present on Hey, not too rough and lower). Flip the switch on the platform to the west and ride it up to the blue door. Open the blue door to enter a small computer room with the usual cannon fodder. Again, watch for barrels, including two near the entrance which are present on all difficulties. Once the computer room is clear, head down the hallway to the north and deal with the mancubus (chaingunner on Hey, not too rough and below).

When you flip the switch at the end of the hallway, the floor you are on lowers, lowering you into a room full of mancubi and zombiemen. Quickly run forward through the gap in the bars before any of them blow up the barrels near the gap. Once you step off the platform, it will raise again and you are not getting back up until you collect the yellow key and complete this section of the level. For now, focus on starting monster infighting - the mancubi will make short work of the zombiemen around the room. Grab the super shotgun from the crates in the southwest and finish off the mancubi yourself.

Next, head into the green structure in the north. Kill the chaingunner inside and clear out the three barrels. Lower the metal block to reveal a short hallway with a shotgun guy and a door. Open the door to reveal a square room with a central nukage pit and a grey pillar. Clear this room of chaingunners, shotgun guys and imps, then head through the door in the north. This door leads to a small room with a chainsaw and a switch. Seasoned players should smell a trap, and they would be right. Flip the switch, and the floor lowers you into close proximity of two spectres (two demons on Hey, not too rough and below). You might wish to quicksave here, as what comes ahead is one of the hardest parts of this level, and arguably of all the levels in the megawad that you have encountered.

To either side is an L-shaped corridor with a small crushing ceiling that prevents you from hiding in there. Head into either corridor, avoid the crusher, and continue north. This leads to an outdoor area with a blood river in the back, four radiation shielding suits and a box of bullets on blocks, a number of zombiemen and shotgun guys and two spectres waiting in ambush. On Hurt me plenty and above, the real problem is added - an arch-vile. You need to clear out the former humans to get to the arch-vile - all before it successfully immolates you with its fire attack in an area without cover. Well placed rockets and plasma will do the trick, but you have to act fast and aim well. Once the coast is clear, equip one of the radiation shielding suits, get into the blood river from either the east and west ends, then flip the switch on the back of the grey panel in its middle.

Backtrack to the square room with the central nukage pit The central pillar will now have disappeared, revealing the red key. As you grab it, the four corners of the room open, each with six imps (four on Hey, not too rough and below). Each corner also has two barrels, so you should put a rocket in each corner as quickly as possible, before the imps move out. This should clear the traps with minimum pain.

Head through the door in the east of the square room with the nukage pit to enter an outdoor area with a circular central structure. You might have some stragglers to deal with here (chaingunners, shotgun guys and a revenant). You might be amazed at the amount of healing provided (at least four stimpacks and four medikits), as well as a useful powerup (invulnerability on Hey, not too rough and below; berserk pack on Hurt me plenty; blur artifact on Ultra-Violence and above). You will need it all shortly for the trap that lies ahead.

Run into the metal hall to the south of this outdoor area, but the moment you step past the thin tiled strip, immediately turn around and go back to the outdoor area. A huge teleport trap has been sprung, summoning a horde of cacodemons from two spawn spots. One is the floating cube in the northeast of the outdoor area; the other is southwest platform in the room after the metal hall. If you had gone all the way down the metal hall and stayed there, you might find yourself out of breathing room. In total, you will face nine (Hey, not too rough and below) or thirteen (Hurt me plenty and above) cacodemons from each spawn spots. Herd them up and try to use the rocket launcher on them. Avoid using the steps in the north of the outdoor area, as it is very easy to get boxed in there.

Once you have stained the ground with the correct number of cacodemon corpses, head back down the metal hall and into the room at its end. Kill any remaining chaingunners here. First, lower the platform in the southeast and ride it up to the ledge with the yellow key. Next, head up the steps in the southwest and ride the metal block up to a vent with a drop-off. This drops you back into the large room where you had to deal with the large horde of zombiemen and mancubi. Two traps will have opened in its southeast corner, releasing four revenants. Deal with them, then flip the switch in the southern trap to re-lower the platform in the south of this room. You can finally ride it back up to the hall north of the computer room.

Exit the computer room through the east. Drop down from the platform and head to the yellow door opposite it. Open it to enter a warehouse area with a large assortment of enemies. Clear them out and proceed through the door in the north. This leads to a small room with an arachnotron, which should easily fall to the super shotgun.

The ending sequence contains a dangerous mix of enemies, and if your goal is merely to survive the level, you probably will need to act fast to avoid massive pain. First, in the room with the arachnotron, go through the northern door (shorter path to the exit). With your chaingun, plasma gun or rocket launcher, mow down the two shotgun guys in the corridor. From this moment on, your priority will be speed over killing enemies.

Proceed east into an outdoor area with four pillars. As you step into the outdoor area, a trap opens in the corridors you used earlier, releasing up to four shotgun guys, two revenants and three arch-viles. The outdoor area also has a mancubus and two cacodemons in cages. Whip out your rocket launcher and make a beeline for the exit of your choice: 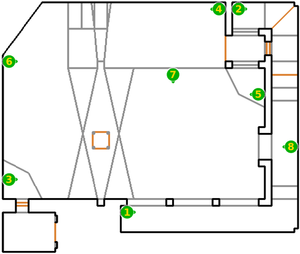 * The vertex count without the effect of node building is 2670.

The unusual wall pattern in the large crate room in the southeast is not made with a custom texture, but through a clever use of the BIGBRIK1 texture. The room's walls have been divided into 16-unit linedefs, and each side displays a small portion of BIGBRIK1. This gives the illusion of alternating rows of very thin bricks and continuous wall.