MAP15: The Inmost Con'dens'ed is the fifteenth map of Claustrophobia 1024. It was designed by James Paddock (Jimmy), with edits by Brett Harrell (Mechadon), and uses the music track "Watz Next?" from Rise of the Triad by Lee Jackson. 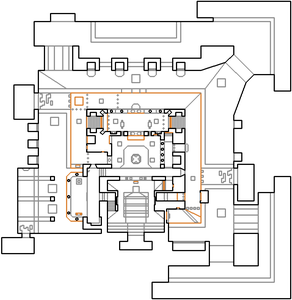 Map of The Inmost Con'dens'ed
Letters in italics refer to marked spots on the map. Sector, thing, and linedef numbers in boldface are secrets which count toward the end-of-level tally.

There is a small trapezoid-shaped opening with a candle in it at the far end of the starting corridor. Walk up to it, back into the left-hand corner and face slightly towards the right (a very tiny arrow-shaped sector (sector 245) can be used to tell you roughly where you should stand). A switch should be visible in the far wall, though it may be slightly obscured by the candle in the opening. Shoot the switch with an impact weapon, then proceed through the level normally.

It should be noted that the switch should be activated before progressing too far through the level; crossing linedef 1716 (in front of the second wooden door) will deliberately hide the switch, making it impossible to trigger the secret switch legitimately, and extremely difficult (but still possible) to do so via idclip.

Once you reach the exit, you will walk over an invisible sector (sector 250) that will trigger a secret. An opening in the right-hand wall has opened up, revealing a red switch. Pressing it will take you to the first secret level, MAP31: Skyscrape IV.

The map has deathmatch starts and additional weapons are provided in multiplayer, but due to its cramped layout and reliance on voodoo dolls for certain effects, including opening doors and lowering bars, it is not suited to deathmatch at all.

* The vertex count without the effect of node building is 1503.

This map takes a lot of inspiration from MAP14 of Doom II (the use of BIGBRIK*, BSTONE*, WOODMET* and FLAT10 in its texture set) and MAP18 of the Plutonia Experiment (the tan bricks, the blood surrounding the playing field).

The author, James Paddock (Jimmy), had to submit the map to the project several times, as it was one of the buggiest maps in its early stages. Eventually, the author decided that he no longer had the time to work on the map further, so he turned over the finishing touches to Brett Harrell (Mechadon), who ironed out the final few bugs and added aesthetic touch-ups to some areas of the map (two of his most prominent edits are the addition of wall detail to sector 234, and the addition of a voodoo doll crusher which is activated if a player crosses over the 1024x1024 boundary line).

The map's name itself is a pun; the inverted commas highlight the word "dens" in the word "Condensed".