MAP15: The Path II is the fifteenth map of Hell Revealed II. It was designed by Jonas Feragen and uses the music track by "The Temple of Judgment," by Petter Mårtensen (Thyrbse). The level contains a secret exit leading to MAP31: The Descent II. 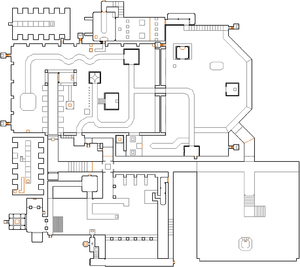 Map of The Path II
Letters in italics refer to marked spots on the map. Sector, thing, and linedef numbers in boldface are secrets which count toward the end-of-level tally.

Grab the megasphere and enter the teleporter. Obtain the shotgun. Jump onto the pillars below (slightly to the west) to obtain the BFG9000 and four energy cell packs. It is imperative that you obtain it right away as there are plenty of powerful monsters between a miss and a second chance. The super shotgun is contained in the eastern room, guarded by barons of Hell and arch-viles.

You are now in the western main room. Follow the path eastwards. Continue north at the junction to obtain a rocket launcher, fiercely guarded by a group of Hell knights, as well as mancubi on the ledges.

Take out the cyberdemon in the tunnel and advance to the stairs in the northeast corner of the eastern main room. Kill the mancubus and imps atop the stairs, as well as ranged monsters on the tower to your south. Do not advance too far into the tunnel just yet. Enter the tower from the blood pool, take the lift, and, as well as obtaining a chaingun, jump off the ledge on the western side to gain invulnerability. This will aid greatly when ambushed by revenants in the tunnel.

Advance through the tunnel and make the jump for the blue key. Pressing the two switches will raise a walkway leading to a teleporter which takes you to the start in the western main room.

Progress south to the blue key door and press the switch beyond. You will now arrive at a major junction with 4 paths. Several enemies will attack you here all while a barrier closes the exit behind you.

There are several switches in the vicinity of the junction:

The barrier trapping you will reopen when the exit tunnel to the eastern main room has been used. If teleported to the western main room without using the tunnel, it is still possible to access the junction by opening a one way door where the barrier sits.

The red and yellow keys may be obtained in any order.

Progress to the junction and take out the spider mastermind on the western path. Pressing the next switch will release a swarm of demons. Fend them off using the berserk fist or the chainsaw. Backtracking to a narrow walkway may be a smart move, as the demons are able to navigate the stairs and the halls are wide enough for them to flank you. If in offensive mood, camp in the compartment behind you and fire off those rockets.

Following the path leads to a cyberdemon guarding a switch. Press the switch, enter the walkway just risen to the south, and enter the teleporter here. You will get a megasphere in the process. The teleport leads to the red key.

Take the lift in the eastern main room, then obtain the yellow key after fighting some resistance far inferior to what previously encountered.

Now take the southern path in the junction. Kill the spider mastermind and its minions. Use both keys, neutralize resistance, and enter the hole behind the lowered wall. You will be teleported to an area much alike the starting area.

There is a switch to the west; it activates a crusher above the single mancubus in this room. Have a laugh at the poor mancubus, then ascend the stairs to exit the level to MAP16: The Chapel Of Black Granite.

The secret exit will be attainable when four switches have been operated. The first three switches are all activated by impact weapons and will lower three panels towards the end, gaining access to the fourth one, which itself raises a walkway next to the regular exit.

None of these secret switches, nor the surrounding sectors or the walkway to the secret exit, count towards the secrets tally.

* The vertex count without the effect of node building is 2078.