MAP15: The Twilight (The Plutonia Experiment)

MAP15: The Twilight is the fifteenth map of The Plutonia Experiment. It was designed by Milo Casali and uses the music track "Waltz Of The Demons" (from Doom's E4M5, E3M7 and E2M7) and contains the secret exit which leads to MAP31: Cyberden. 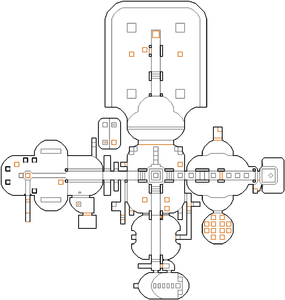 Map of The Twilight
Letters in italics refer to marked spots on the map. Sector, thing, and linedef numbers in boldface are secrets which count toward the end-of-level tally.

Enter the teleporter in front of you, pick up the shotgun then flip the switch in front of you to go down to a bridge. Cross the bridge, collecting a super shotgun on the way, until you reach a crossroads with a rocket launcher and a megaarmor then kill all the chaingunners ahead (except the enemies in the corners as a hidden arch-vile will resurrect them). Take the east path and go straight forward past a cacodemon to a door overlooked by two mancubi and open it to see a revenant ahead guarding the yellow skull key. To get the key you will also have to fight your way through some more revenants and Hell knights that teleport in.

Take the west path to an area with cacodemons and several more chaingunners and go forward until you reach a medikit, which will open five metal blocks around you containing still more chaingunners. Flip the switch here to release a revenant and raise a bridge on your left leading to another switch requiring the yellow key, flip it then go forward to find a third switch that will open the exit area. Go back to the crossroads to find that some steps have risen leading to the chaingunners' platform - the sky behind this platform has disappeared to reveal a new area with mancubi, chaingunners and pain elementals, along with a spiderdemon on Hurt Me Plenty skill level or higher. Clear the way then take the megasphere and head due north to a sky teleporter; after entering it, step on the exit teleporter in front of you to go to MAP16: The Omen.

Just before reaching the sky teleporter at the end of the level, look at the left-hand wall to see a section with a lightning bolt. Open this wall and step on the teleporter behind it, open the door in front of you then step on the exit teleporter to go to MAP31: Cyberden.