MAP15: Tricyclic Looper is the fifteenth level of the first episode of Back to Saturn X. It was designed by Brett Harrell (Mechadon) and uses the music track "Quicksilver" by James Paddock. The par time is 5:45. In the official add-on version, this level's name is Tesselation Cycle.

This level contains a secret exit to MAP31: Optical Hopscotch. 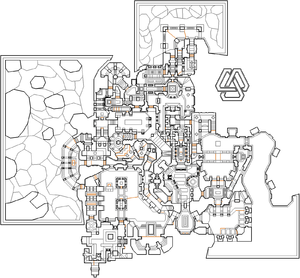 Map of Tricyclic Looper
Letters in italics refer to marked spots on the map. Sector, thing, and linedef numbers in boldface are secrets which count toward the end-of-level tally.

Head up the steps to see a switch on your right (plus a shotgun on I'm Too Young To Die (ITYTD) and Hey Not Too Rough (HNTR) skill levels) and pull it to lower the wall, revealing a courtyard with barrels that has a computer area map at its east end. There are two doors on the north side of the courtyard - open the west door to see two staircases ahead, then go up the right-hand staircase and walk straight forward to reach a junction with several zombiemen. Go up a second staircase at this junction and open the door at the top, then follow the narrow passage past a few zombiemen to reach another staircase guarded by imps (one or two demons will also be released behind you). Head up the steps and open another door, then push past some more zombies to reach an outdoor walkway with yet more zombiemen and shotgun guys - as you advance, watch out for cacodemons teleporting to the north cliffs as well as one or two more demons being released from a closet. Open the door at the south end of the walkway and run forward to drop down to a switch, then pull it and run forward again to land in a chamber with the yellow keycard.

Slay the imps and shotgun guys that teleport in, then open the door here to get back to the first pair of staircases. Return to the starting courtyard and open the yellow key door at the south end, go up some steps and follow the passage round to a room with a super shotgun - taking it will open the doors ahead to reveal demons and one or more cacodemons. Enter the cacodemons' chamber to lower a wall nearby and ambush a couple of zombies, then enter the demons' chamber and kill some more demons that have been released before stepping into their compartment to lower another wall that conceals zombiemen. Follow the corridor until you drop down to a door and open it, then continue following the path until you reach a berserk pack - from here you can drop into an open outdoor area where zombiemen and imps are on guard. Head north and west around the central structure, noting some demons that are released behind you, until you get to a door and open it to find two lifts that have imps hiding behind it (there is also a rocket launcher here on ITYTD and HNTR). Open the door behind the lifts then head straight forward past some zombiemen, before turning right to see some gray cables on the floor - you can follow these cables through a winding passage until you reach a couple of zombies guarding a switch. Flip the switch then retrace your steps to see that a room with demons and Hell knights has opened; open the door in the north-east corner of the room and kill a waiting arachnotron, then enter the building in front of you and activate a lift ahead to go up to the red keycard.

Taking the red key will cause a pack of cacodemons to teleport in - you can leave the area by dropping to ground level and heading back to the south-east corner, where a lift will take you back up to the ledge that held the berserk pack. Retrace your steps to the starting courtyard and open the north door again, then go up the left-hand staircase to find a red key door and open it (there will be a plasma gun here on ITYTD and HNTR). Follow the steps round to another door and open it, then push past some zombies to find an armor in front of a "LOCK" panel - this panel will open a door in the starting area leading to the exit. Go back to that area, fighting some imps (or cacodemons on Ultra-Violence (UV) and Nightmare (NM)) on the way back), then destroy one or two arachnotrons (on HMP or higher) that have been released before going through the door you just opened to find another "LOCK" panel. Press this panel to open the walls on either side and reveal two barons of Hell (or mancubi and demons on HMP or higher), then head south to find a plasma gun protected by chaingunners. Follow the hallway north to confront two cacodemons and an arch-vile, then go round the corner and open a door to reach a curved staircase - as you advance you will be blocked by imps, zombies, knights and revenants that teleport in (on UV and NM, a cyberdemon will appear outside). Open the door at the bottom of the stairs to find the exit switch leading to MAP16: Get Out Of My Stations II.

To reach the secret exit to MAP31: Optical Hopscotch you will need the blue keycard. First, follow the directions in secret #1 to enter the blue key room and find a switch on the pillar that holds it - this switch opens some bars on the south side of the room that you will pass through later. Now follow the walkthrough above until you reach the berserk pack near the red key area; after dropping down to ground level, look east to see a lift and lower it to reveal some shotgun guys then step through to a chamber with one or two cacodemons. Continue east past a second lift to another outdoor area then head up the stairs on the south side, watching out for cacodemons and zombies that are released around you on the way. Turn left at the top of the stairs and follow the ledge to a lift with a mancubus on it, then ride the lift up and dispose of two more zombies and mancubi before opening the door in the west wall. Push past a few zombies and imps to get to a switch, which will raise some stairs leading up to the bars you opened earlier.

Step through the nearby broken fan and drop down to ground level, then head south to get back to the chamber between the two lifts you used earlier. Use the west lift to get back to the red key area followed by the lift leading back up to the berserk pack, then open the nearby yellow key door to see some imps guarding a second door. Open that door and follow the ledge north to the stairs you just raised, then go through the doorway at the top and press the arrow button to lower the pillar holding the blue key. Now go to secret #3 and open the blue key door here, then open a second door ahead to find a knight (or arachnotron on HMP or higher) guarding a "LOCK" panel which will reveal the secret exit teleporter.

* The vertex count without the effect of node building is 6803.