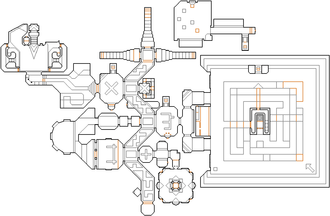 Map of Twilight of Enk's
Letters in italics refer to marked spots on the map. Sector, thing, and linedef numbers in boldface are secrets which count toward the end-of-level tally.

You start in a zig-zag corridor - as soon as the level starts, shoot the electron through the window to your left to disarm a trap. Follow the corridor all the way north to a tazer and collect it, then head back the way you came to find that two compartments have opened revealing a keypad and a D-man. Press the keypad then run back to where you found the tazer to see that the surrounding windows have lowered, then enter the dark tunnel behind the east window to teleport to a new area. Head outside and slay any waiting enemies, including phages and terminatrixes on "Let's rip them apart!" (LRTA) skill level or higher, then open either of the doors on the east side and follow a passage round to some steps, which you can take up to a ledge that leads to the blue Z-key. Taking the key will lower the south wall in this area, letting you enter a room with a bridge over water - cross the bridge and open the locked door at the other end to enter a chamber with a photon 'zooka.

Step through the window to get back to the zig-zag corridor, press the keypad again then run back to the north end of the corridor and enter the west tunnel this time; you will teleport to a room that holds ICEs on LRTA or higher. Enter the east hallway to find a laser sensor in front of a button, step through the sensor to dim the lights and open two compartments behind you (which hold ICEs and D-men on LRTA or higher), then press the button to lower a pillar behind you holding an electron and the yellow Z-key. Stepping on the pillar will lower a wall near the button, revealing a teleporter that leads back to the dark alcove near the starting point - if you did not destroy the electron inside that alcove earlier, you will telefrag it and take potentially lethal explosive damage. Before leaving the alcove, step backwards to get some light amplifier goggles.

Return to the keypad and press it again, then run back to the north end of the corridor and enter the north tunnel this time; you will find yourself at the foot of a pyramid defended by monstructs, as well as mechamaniacs on LRTA or higher. Go round to a notch on the west side of the pyramid and press the low blocks here to lower them like lifts, go up to the third tier of the pyramid then walk north and east around it until you reach a wall. Press the wall to lower it like a lift, ride it up then run north off the end of the wall - the column ahead will open to reveal a teleporter that will send you to the south side of the pyramid. From here you can run north into an alcove with some blue bars (requiring the blue key to open), then open them to find the red Z-key.

Taking the key will allow some D-men (plus stealths and terminatrixes on "I am immortal" or higher) to teleport to the pyramid; return to ground level then go through either of the openings in the west wall to find a hallway leading to a red-floored room. Open the bars at the south end of the room (requiring the red key) and flip the switch behind them, then run through the window and step over a platform that has risen to reach another window on the opposite side. The wall ahead will open to reveal some thugs, so fight them off then go forward to a water pool with a couple of waiting phages (plus D-men on LRTA or higher) before heading south to a door requiring the yellow key to open. Kill a waiting monstruct then run through the two windows ahead to reach some steps that lead down to a doorway blocked by wooden bars. Approach the bars to open two compartments behind you holding thugs (or buzzers on LRTA or higher), then flip the switch inside the south compartment to open the bars and gain entry to the exit room.

The exit room has eight buttons in its corners, which must be pressed in the correct sequence to open and then reach the exit.

In the bridge room, drop into the water on the south side of the bridge, then follow the outer wall west to find an enk blind.

After getting the blue key, open the door on the south side of the photon 'zooka room and press the hand scanner behind it to raise a platform in the zig-zag corridor. Run across this platform to get through the window on the opposite side, then lower the lifts here to find some large ammo pickups and a valise.

Activate the northern-most pillar in the yellow key room to go up to an uzi. From here you can leap to the other pillars to get a molecule module, a case of torpedoes, a case of cartridges and a case of rounds.

A cenotrophexine is hidden under the column on the east side of the pyramid.

* The vertex count without the effect of node building is 1562.