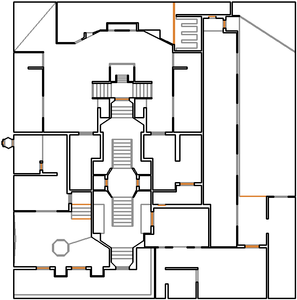 Map of Urban Jungle
Letters in italics refer to marked spots on the map. Sector, thing, and linedef numbers in boldface are secrets which count toward the end-of-level tally.

Secret exit: Go through the door opened by the switch in #2 then turn right and go through either door to reach an outdoor area. Continue up the steps - this lowers two platforms south of the start. One contains several monsters, the other contains several boxes of rockets. The latter also has a door, which leads via several rooms to the secret exit.