MAP15: Waste Disposal is the fifteenth level of Icarus: Alien Vanguard. The level is set within the waste management facility of the exploration cruiser, Icarus, and it was designed by Ken Simpson and Jim Kennedy. It uses the music track "Heart of the Hive" by David "Tolwyn" Shaw. 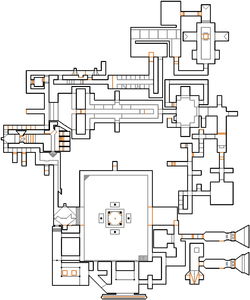 Map of Waste Disposal
Letters in italics refer to marked spots on the map. Sector, thing, and linedef numbers in boldface are secrets which count toward the end-of-level tally.

Open the door in front and approach the wall in front for it to lower. Go through it to a fork. Take the right path, going downstairs and the wall lowers for you. Head around the corner and take the first left to a switch. Flip it to open the wall with lights behind you. Kill the enemies and open the door here. In the next area, you can go down in the blood or around the ledge and then drop down, but either way leads to a room to the east with two doors. Open the northern one, and head around until you are ledge where the enemies were. Head towards the opening on the left and press the lion switch, which lowers the eastern bloodfall. Go through that passage to the wall with lights on top. Press on it to lower it and head through the next door and down into a blood pool. Head west from there, up the steps and take the first left. Open the wall at the dead end and use the teleporter.

You wlll appear in a room just behind the room with the red keycard, guarded by shotgun guys. Open the two doors to the right into a monster-filled room where you can get the blue keycard. From there, head south to the crushers, and follow them westward, until you reach a passage with boxes of shells. Take the path with blood leading upwards and keep going west through the wall that opens, jumping out of the window to the right. Go left after you jump, and head around until you find that you are back in a familiar place, where you flipped the switch to open the big wall earlier. Now you need to retrace your steps until you arrive at the teleporter you used previously. When you do, enter the teleporter and you will arrive at the red key room. Pick it up and leave the room via teleporter to go back. From there, turn left and left again to the next teleporter, and take it to be on the left path of the first fork, close to the starting point.

Follow the trail of water to a large garage door and flip the switch to open it. In this large room, climb the stairs to the southeast and enter the broken vent. At the first fork, go left, and at the second, head right to the blue door. Look out for a wall of lost souls behind you when you approach the door. Open the blue door to find the "SIMU EXIT", and press on the panel furthest from the right to take the normal exit.

Due to a secret being impossible to reach, you can only obtain 75% Secrets on this level.

A multiplayer-only baron of Hell (Thing 165) in the large rectangular area has no flags set for any of the three difficulty classes, so it does not actually appear in the level.

* The vertex count without the effect of node building is 1308.

The inaccessible secret #4 originally contained a multiplayer start point, but it was removed, and the sector overlooked, during later development of the level. [1]