MAP15: Where Hate Runs Red is the fifteenth map of Plutonia 2. It was designed by Charly Goulois (Kira), and uses the music track "Starting Out" by Stuart Rynn. The par time defined in MAPINFO is 3:30. It appears to have been inspired by Perfect Hatred, Against Thee Wickedly and Speed.

This level contains a secret exit leading to MAP31: Cybernation which is only accessible via an arch-vile blast attack to access the secret exit which is behind a window near the regular exit. 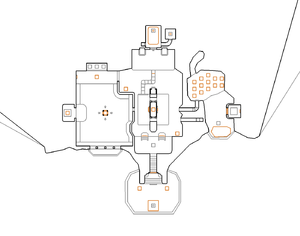 Map of Where Hate Runs Red
Letters in italics refer to marked spots on the map. Sector numbers in boldface are secrets which count toward the end-of-level tally.

Get the berserk pack and kill the Hell knights. Open the door ahead and pick up the super shotgun on the other side. There are a few lost souls and pain elementals in this large room, so get rid of them before proceeding. Use the ramps near the super shotgun platform to jump to the next platform, where you will need the red and blue keys to proceed further into the map. When you jump, an arch-vile appears behind you while cacodemons will attack from the front. Go to the left side of the platform and look left for an opening. In this area, drop into the blood, and notice the central pillar has a teleporter on it. The directional arrows point to what side of the teleporter you will end up on when you use it; for example, enter the teleporter from the southern side to appear on the southern ledge. While you are here, there are spectres in the blood, and a cyberdemon attacks from the left side (he may have seen you from the beginning of the level). There are several lowered bridges here, and if you teleport to the northern side of the room (watch out when you pick up the plasma gun, as chaingunners will appear), you will find a switch that raises the bridges, so you can freely use them to move around the room. The left side has the blue skull key.

After you have the key, return to the big platform and press the skull switch with blue bars around it. This will open up the central shack with a teleporter inside. Enter it to appear in a courtyard on the right side of the map. Grab the rocket launcher and prepare the fight a large horde of revenants. Open the door and blast the cyberdemon, then press the switch inside. An arch-vile shows up in the blood pit where the revenants were, so kill him and head into the blood pit. An opening to the southwest leads to the red skull key, as well as a passage back to the big platform. Open the door on the other side (with red skull markings) and press the skull switch behind it. This will lower the red skull barrier to the north. Walk up the stairs, and the door ahead will open up right away, with arch-viles inside. The normal exit is straight ahead. The secret exit is also in this room, and is accessible through the fake window; read Secret #3 to reach it.

* The vertex count without the effect of node building is 874.