MAP15: Wormhole Junction is the fifteenth map of Ancient Aliens. It was designed by Paul DeBruyne (skillsaw) and uses the music track "Hypercube," composed by Stuart Rynn (stewboy). The par time is 7:30. 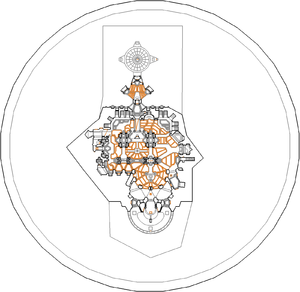 Map of Wormhole Junction
Letters in italics refer to marked spots on the map. Sector, thing, and linedef numbers in boldface are secrets which count toward the end-of-level tally.

Collect all the weapons and shoot the switch in front of you to drop the walls to either side and begin the level. Deal with the two cacodemons and a pain elemental to your right, then head towards the main area on the other side. Before you drop down, a combat armor can be found on the ledge. The main loop here will fill up with practically every enemy type, save for archviles. In the center of the loop (accessible from the south end), you should find a pillar with a switch on the back side. Pressing this will raise some light stairs to the upper floor surrounding the pit, so circle around clockwise and climb up. Follow the path and you should reach the blue key after dealing with a couple of ambushes. Drop down after grabbing the key and you will find yourself in front of two blue doors. The left will take you to the yellow key, while the right will take you to the red key. You can get these in either order.

Taking the left teleporter will put you on a ledge on the south side of the map. Moving off the destination will drop the floor exposing you to imps and Hell knights, as well as teleport in some alien guardians, stealth plasma aliens, and a spider mastermind back in the main loop. Head forward and press the switch on the yellow key pillar to lower the balconies the imps were on with more monsters in waiting. This will also give you access to the outer ring with many zombiemen in the area. Circle around and press a switch out here to lower the yellow key. Head back and grab the key to trigger another ambush. After this, open the yellow door and grab the BFG9000. This will open a door on the other side of the platform which heads out onto the light stairs that lead up to the blue key.

Taking the red teleporter will put you on a platform overlooking the north end of the loop. Turn around and press a switch to raise a bridge to the other side. Grabbing the red key will lower you onto a platform facing two mancubi and a group of chaingunners. Kill them, then shoot the switches behind where the mancubi were to activate the lift back to the upper floor. Open the red bars and deal with a small ambush before dropping back down to the main loop.

After acquiring all three keys, head to the door on the west side of the loop and take the lift up. Press a switch around the corner to trigger one more large battle. This switch also raises a second set of stairs near the red and yellow teleporters, so circle clockwise again and take the stairs up. Deal with one more trap and open the door to the normal exit. Alternatively, you can head towards the secret exit from here as well.

* The vertex count without the effect of node building is 10045.