MAP15: Yesterday's Noose is the fifteenth map of 50 Monsters. It was designed by Brayden Hart (AD_79) and uses the music track "Call Doctor Birch, 0-800," composed by Gus Knezevich (Alfonzo). 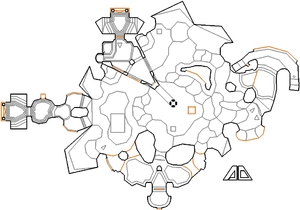 Map of Yesterday's Noose
Letters in italics refer to marked spots on the map. Sector numbers in boldface are secrets which count toward the end-of-level tally.

Only 66% secrets is possible on the map due to the nature of Secret #3.