MAP15: Ziegenhaus is the fifteenth map of Super MAYhem 17. It was designed by Xaser Acheron and uses the music track "Slam Shuffle," originally composed by Nobuo Uematsu for Final Fantsy VI and sequenced to MIDI. 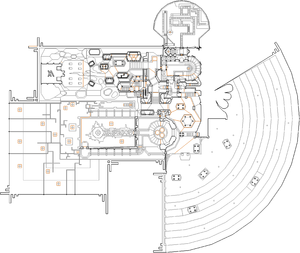 Map of Ziegenhaus
Letters in italics refer to marked spots on the map. Sector numbers in boldface are secrets which count toward the end-of-level tally.

To reach Secret #8 and the secret exit, you need to find eight red coins in the map, which can be collected in any order. You will also need the blue key to access both exits. The locations of the coins are given below:

* The vertex count without the effect of node building is 6504.