MAP16: Bootcamp is the sixteenth level of Icarus: Alien Vanguard. The level takes place in a simulation, and was designed by Mike Marcotte and uses the music track "Fast" by Jeremy Doyle. 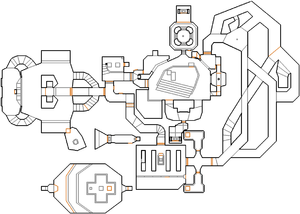 Map of Bootcamp
Letters in italics refer to marked spots on the map. Sector, thing, and linedef numbers in boldface are secrets which count toward the end-of-level tally.

Grab the shotgun and then flip the switch behind it to open the door into the big room. There are a lot of zombies around here, so kill them and head for the door to the right of the entrance to the big room. Open the door and take the next one you see via the switch on the wall. In there, take the door on the left. Around the bend, flip the switch to lower the hallway, and open the door at the bottom. Here, you can grab the super shotgun straight ahead, but the blue key will be closed off, and the bridge will lower while lots of zombies will ambush you from all sides. Head around the blue key building and climb either staircase to the west. In the computer room, flip the switch to lower a lift to the building from the backside. Quickly reach the lift before it rises and you will obtain the blue keycard.

Backtrack to the hallway you lowered and flip the nearby switch to rise it up again. Open the blue door at the top and take the next hallway into a library-like area with a throne in front of you. Go left and find a door here, and behind it, take the door on the right. Kill the Hell knight inside and take the teleporter. Kill the zombiemen in front of you and approach the wall for it to reveal shotgun guys. Approach the next wall and it will open for more zombies to show up. Get around the structure and take the teleporter behind it. Kill the chaingunner in the room, but reenter the teleporter you just came out of. You will appear on top of the structure that you went around, and on top of it is the yellow keycard. Now go back through the teleporter and head back to the intersection, taking the yellow door.

The next area is an interconnected series of hallways, some on ground floor and some above it. The main hallway in front of you has several monsters, including a cyberdemon on Ultra-Violence or higher. The red keycard is also in this area, and the ground hallway eventually leads to the red door. For the fastest way to reach the red keycard, take the stairs up to the upper walkway and jump two gaps (this could prove tough since some enemies on ground floor could block you). After you jump two gaps, take a sharp right to find a revenant guarding the red keycard. Pick it up and head for the red door. Open it and you will spot through the window more monsters in the main room, including arachnotrons, an arch-vile and some cacodemons. Flip the switch near the lift and ride it up to the column. Approaching the column reveals walls around you with imps and a spectre. Proceed past the column to reenter the big room. Now take the lift here up and open the red door to find the exit teleporter. Hit the panel furthest from the right to exit.

In the big room with the zombies, head down the steps and the press on the metal wall with silver walls around it to get the backpack.

In the library area with the throne walk onto the throne to dim the lights and reveal a wall with many monsters (as well as Secret #5). There is a switch nearby that has two halves. Pressing the left half will turn the lights back on, while the right half raises the wall up again. If you get trapped on the south side of the wall, press the switch on it to leave.

* The vertex count without the effect of node building is 1173.