MAP16: Breakdown is the sixteenth map of Simplicity. It was designed by Melissa McGee (Agent Spork) and uses the music track "Goin' Down the Fast Way", originally created by Lee Jackson for Rise of the Triad. The par time defined in MAPINFO is 4:50. 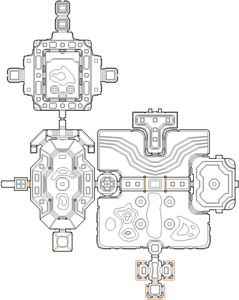 Map of Breakdown
Letters in italics refer to marked spots on the map. Sector, thing, and linedef numbers in boldface are secrets which count toward the end-of-level tally.

Head forward to a super shotgun and kill the cacodemons protecting it, then press the lion switch behind the armor at the south end to lower the wall and reveal a rocket launcher; once the wall stops moving, two revenants will appear in the courtyard and an arachnotron and two mancubi will appear on the surrounding walkway. Go round to the north side of the walkway and flip the switch here to open doors on either side with revenants behind them, then go through to find a chaingun before opening another door to the north to face a nightmare demon. Go forward to a looping corridor and fight your way past some imps and Hell knights to reach its north side, then continue north to some sludge pools and kill the demons and revenants that rise from them to get to a switch. Flip the switch then head back to the corridor and go through the doors on the east or west sides to reach another courtyard with some cacodemons - there is another switch on the north side of the courtyard behind a supercharge (or medikit on Ultra-Violence and Nightmare skill levels) that will open two compartments containing four or six arachnotrons, as well as allowing various enemies to teleport in. Flip the switches inside both compartments to lower a pillar in the courtyard holding the blue skull key.

Go back to the starting area and open the door on the east side (requiring the blue key) to confront a mancubus guarding a plasma gun, then step through a doorway to a large outdoor area with a broken bridge. A number of cacodemons, imps, demons and revenants will fade in as you drop to ground level; fight your way over to a split door on the south side and open it to confront three knights, then flip the switch at the south end of the corridor to lower the surrounding walls and reveal three arachnotrons. Flip another switch in the south compartment then go back outside to confront a pack of imps, demons, revenants and arachnotrons that are teleporting in; fight your way through to the north side and go through the now-open doorway here, then flip the switch directly ahead of you to lower the monitors on either side and reveal teleporters; deal with two mancubi and revenants that teleport in behind you, then enter either teleporter to get back on the bridge and run across a platform that has risen to reach the other side. Go through the doorway ahead and slay a revenant and two chaingunners that fade in before claiming the supercharge, megaarmor and red skull key in this room.

Go back to the starting area and open the door on the west side (requiring the red key) to confront a baron of Hell guarding another switch; flipping it will return you to the courtyard where a BFG9000 and two energy cell packs have appeared. When you take the BFG two cyberdemons will appear in front of and behind you - use your new weapon to slay them so you can escape from the courtyard, then go through the door that opens on the south side and enter the sky floor here to end the level.

* The vertex count without the effect of node building is 3116.