MAP16: Burial Grounds is the sixteenth map of Scythe. It was designed by Erik Alm, and uses the music track "Donna to the Rescue" from Doom. 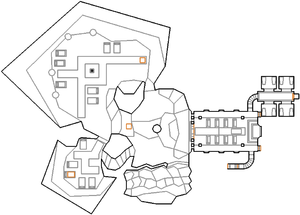 Map of Burial Grounds
Letters in italics refer to marked spots on the map. Sector numbers in boldface are secrets which count toward the end-of-level tally.

Climb the rocks up to a large open area. From there, head left through a cavern to an area with tombstones. One of them contains a super shotgun. Head north into a larger area with tombstones. The blue skull key is to your right, but get the red key on the tombstone straight ahead first. If you pick up the nearby plasma gun, some tombstones far behind you will rise up revealing monsters, a berserk pack, and a megaarmor. When you pick up the blue key on the ledge, the gray stone wall with the torches in it will reveal a chapel with imps, an arch-vile, and two barons of Hell. There is a red switch on the left, and a blue switch on the right. Use the red switch first, and go through the nearby hall that it opens. There are several small coffins and demons in this room. Use the teleporter at the end to appear on top of the altar in the chapel. You will land on a yellow skull key. Now use the blue switch and head through the nearby hall hear to the yellow exit door.