MAP16: Cold Shoulder is the sixteenth map of 1000 Lines 2 - Community Project. It was designed by Justin Kelly (Breezeep) and uses the music track "Call Doctor Birch, 0-800" by Gus Knezevich (Alfonzo). 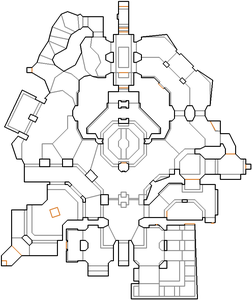 Map of Cold Shoulder
Letters in italics refer to marked spots on the map. Sector, thing, and linedef numbers in boldface are secrets which count toward the end-of-level tally.

Walk straight forward to find a chaingun and two boxes of bullets; you should see the red and yellow keycards on two pillars in front of you. Go through the east doorway and kill a few monsters blocking your path, then continue east and south to find a revenant guarding a lever that will lower a lift behind you. Ride the lift up and kill a couple of zombiemen, then run north through the window and push past some imps until the path turns a corner; you will see a red skull button on the south-west wall that you can press to lower another lift behind you. Wait for the lift to rise then follow the ledge south to a doorway, which leads to a red teleporter being guarded by chaingunners, along with imps and shotgun guys that are revealed to your right.

Enter the teleporter then follow the next corridor east and north past some spectres to another red button - pressing the button will lower the floor and reveal a few enemies to your left. Follow the ledge down to ground level and pull the lever on the north wall to lower the nearby wall and return to the starting area, then head west to find a mancubus, revenant and arch-vile guarding another red button. Press the button and quickly step back to dodge a revenant that teleports in, then head back outside to find that the pillar holding the red key has lowered.

From the red key, kill the enemies that have been released into the room then retrace your steps to the red skull button in the north-east corner of the level. This time, head past the button and go west through a brown building containing a mancubus, then look north to see two zombiemen standing in a doorway. Go through this doorway then turn left and head up the snowy steps to a yellow teleporter that will send you to the south-west corner of the level, kill the imps and Hell knight in front of you then step off the block you are standing on - the south-west walls will lower to reveal two mancubi and a revenant, who are guarding another teleporter that leads back to the building on the north side of the level.

Press the lift that has risen in front of you to lower it, ride it up then open the yellow door in front of you to find two shotgun guys, two chaingunners and a mancubus guarding a yellow skull button; the button will lower the floor you are standing on as well as the pillar holding the yellow key, but you will have to contend with revenants and mancubi that are released from a closet to the west as well as an arch-vile that teleports to the east ledge. With both keys, head back to the north building and open both of the locked doors in the north wall to find a revenant guarding the exit teleporter.

Head anti-clockwise around the level until you get to a brown ledge on the south-west side. This ledge leads to a super shotgun.