MAP16: Deepest Reaches is the sixteenth map of TNT: Evilution. It was designed by Andre Arsenault and uses the music track Blood Jungle that also plays in MAP26: Ballistyx. Unlike the others thus far, it takes place in a deep, dark subterranean hell-style setting.

This level was also ported to PlayStation Final Doom as MAP19: Deepest Reaches.

The level is notable for featuring a wide variety of environments. The player will encounter a pool of molten rock, damp gray caverns flowing with water, a dry altar area, as well as a red grotto with glowing walls. In the west, there is a wooden hall, while at the eastern end, there is another hall made of green marble. As the level contains a water cavern, this is one of the few maps in Evilution to have waterfalls. 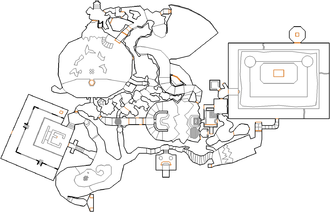 Map of Deepest Reaches
Letters in italics refer to marked spots on the map. Sector numbers in boldface are secrets which count toward the end-of-level tally.

First, kill the enemies in the starting room, then collect all needed items. Open the door to get into an open area. Get to the southern side by either jumping over the rocks or dropping into the lava and lowering the southern brown pillar with super shotgun on it (not safe). When you will be on the southern side, squeeze into a passage between two green torches. Two doors are before you but you now need the one on your right (southwest). Remember this closet room because you will need to get here later.

Enter the aforementioned door, then rise on the stairs to get into a wooden room reminding a library. There is a wooden structure in the middle, so walk left and turn right. You will see a dead hanging body, some items and a blue skull button. Press it. This will reveal the rest of the "library" with a corridor upstairs. In the south and west of the room there are two staircases. Use any and find and press a skull button in this corridor (west). The button has revealed a cave to descend into for you, so go downstairs and head into the now opened wooden wall in the east of the room. Descend down into a watery cave. Collect needed items here if you want. Head into a forkway east of the cave. Go down the stairs and pass the room on your right. You will see a marble room at the bottom of the cave. Ignore it for now and turn right and head into a teleporter which will lead you into a small closet with the blue skull key. Grab the key and head into another teleporter ahead. Go back to the place where you have seen two doors with one of them leading to the "library".

Tip: if you want to get there faster, grab the key in the blue key closet and reuse the teleporter you just came into. This will lead you straight to that room.

Use the door leading southeast. In the next room, you can see two red torches and a river. Go ahead into a lift. At the bottom, press the lion switch to open the door. Use the stairs leading down. Here, you can see an altar and an inverted crucifix with a red key within, but you can't access this one. Go into the blue door. Rise on the stairs. You will see a very tall pit. Do not fall and go left into a red cave. In the cave, proceed all the way south towards a dead end with a red wall. You can actually lower this wall as a lift. This will lead you to another cave. Go to northwest of the cave to find the yellow skull key floating over a star shaped figure with a sky glimpse.

Now, return to the entrance of the first cave, red. This time, go to the north of the cave. Here is a small hole. Drop into it to get into a third cave which has a tan color. Go to the northwest here. You should now be raised on a platform. After the platform has finished rising, enter a door here. This will lead you to the very beginning cave. Get back to the room of two doors once again.

Use the first door (southwest) again to get into a library. Descend down into a cave and proceed all the way east to the familiar steps leading down and the marble room mentioned in the first clause. Open the yellow door in this room.

You will see a scrolling ghosts wall here. Turn right and descend down to enter a large marble hall. You can collect items and kill the enemies here or you may wish to reach the western rooms for various weapons and items but doing all these is not required for completion. Get to the northern side of the hall and merely open a green tech door. There will be a teleport pad. Use it and you will be brought into a familiar area facing a switch not present before. Press it, and the stairs will be made leading down right here. Descend on them and press the button to finish the level.

* The vertex count without the effect of node building is 1990.