MAP16: Escape from Chaos is the sixteenth map of Requiem. It was designed by Iikka Keränen, and uses the music track "Reason for Nothing" by Mark Klem. It makes use of simulated windows on the side of a lowered ceiling. Oddly, the level begins inside of a restroom, and ends with the player escaping the level on a space shuttle. 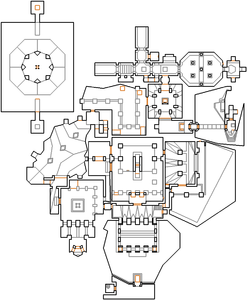 Map of Escape from Chaos
Letters in italics refer to marked spots on the map. Sector, thing, and linedef numbers in boldface are secrets which count toward the end-of-level tally.

You will start on a toilet. Exit the outhouse and you will end up outside, go into the shack to find a lift down and you will appear in front of a castle. Enter it, going through until you find a door. Drop down to the ground floor here, then look towards the southwest to find a lift you can use. Take it up, and then you need to hop across the blocks to the other side, grabbing a rocket launcher in the process. On the other side, hit the switch and it will raise a block up so you can cross to the north. Cross and then jump down to the gray floor, going around the structure to a switch. Pressing this switch opens the center of the structure from the north. Inside of it may be a Hell knight or two, along with a super shotgun. When you pick up the weapon, you will face an imp who is guarding the blue key. Pick up the key and then drop down to ground floor, then open the blue door to the west.

Several zombiemen are here along with a lift. Take it up, looking out for imps and cacodemons at the top, then open the door to find yourself at the top floor of the previous area. Go all the way across to where the berserk pack is and open the next door. Inside are a lot of demons and spectres. Kill them and head for the door to the south. Turn left and follow the path to a switch. After pressing it, backtrack to find some bars are raised, so head through this thin passage. You will then appear at the entrance of the castle, but atop a ledge. You will need to hug the walls to proceed further with this map. If you fall anytime, take the nearby stairs that form. Hug the wall until you reach the outside ledge of the castle, and then follow this ledge till you find a lift. Ride it up, and then cross the platforms above the entrance of the castle to the other side. Once you are on the other end, take the lift down to the other outside ledge and follow this ledge hugging the wall if you need to in order to reach the rest of the level. In the new area with the blood fountain, drop down and head south to find some monsters and a metal terminal. Approaching this terminal reveals an arch-vile and a yellow keycard. Open the yellow bars to the left of the blood fountain to reach a new area with a puzzle.

There are six switches here for three platforms. Each has a down switch and an up switch and each reads left to right. The left two switches control the left platform, the middle two control the middle, and the right two control the right. If you press a down switch, this resets the platform all the way down, and if you press an up switch, it raises it up again. To get through this puzzle, first hit the up switch for the left platform once. Then hit the up switch for the middle platform twice. After that, hit the down switch for the right platform to reset it, then raise it up once with its respective up switch. By doing this you have made the platforms so you are able to jump to the other side. Now use the nearby lift to go up and kill the monsters here. Once they are dispatched, then make running jumps until you reach the other side. If you fall, or if you did not do the puzzle right, use the teleporter to return. Once you make it to the other side, you will find that you are unable to open the door because it requires the red key. Drop into the nearby chute and then head around, where you will somehow reach the top of the chute again. There is a button at the top which actually opens the red door. Go through this door, and follow the red road killing the monsters, until you reach the next door. This one also requires the key, but it is in this area. Use the nearby lift that has a box of shells on it to head down to the lower ledge, and manuever through here killing lost souls if necessary to get the red keycard. Once you grab it, open the door to a small square yard.

In this yard, drop down and use the lift to the north. Go across it to the sewer like area, quite reminiscent of an earlier level in the megawad. The way to the right is blocked off, so go left and up, and head up the nukage stairs. Now head up the nearby ledge to the north, going east and hopping a tiny gap, then go into the tiny room north to find a button to press. It will open the bars to the eastern part of the sewer area. Look out for the chaingunner (or mancubus on Ultra-Violence or higher) and head down into the large sewer area with a few imps, then press the switch near the bars to open them. Drop down into the nukage chute, and then take the teleporter. If you want a megasphere, get one by using the nearby lift before teleporting. You will end up in a blood red area with a walkway leading to a bloody staircase and a central platform going up and down with a some barons of Hell and a pillar with switches. You can press all of the switches if you want to, but you only need to press one to get the north walkway to rise up. Do not drop on it immediately, for it is damaging (also the blood on the ground floor is damaging and inescapable as well). Wait for it to come up to your level and dash across to the teleporter to minimize damage. When you use the teleporter, you will be in front of a lift, use it and you will be back at the square yard again, this time with the center switch available. Press it and the southern wall will lower revealing an arachnotron or two. Inside this area, press the elevator for it to go down, and kill the imp on it as well as the revenant that appears from behind. Now use the up switch to head up. Open the next couple of doors to a walkway to a shuttle. Embark on the shuttle and press the switch to exit the map.

* The vertex count without the effect of node building is 1834.