MAP16: Fortress: Bishop's Tower is a level in Strife. It uses the music track "Fight".

Having fought through the Bishop's fortress, the Strifeguy must now find his way through a fortified tower to confront this foe and claim the second piece of the Sigil. 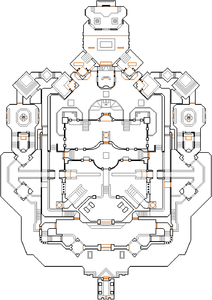 Map of Fortress: Bishop's Tower
Letters in italics refer to marked spots on the map. Sector, thing, and linedef numbers in boldface are secrets.

Open the door in front of you, and be prepared to face two crusaders on Elite or Bloodbath skill level. Go through the dragon gate ahead (two more crusaders are found here on Elite or Bloodbath) and then look left or right to see two gates at the far ends of this room. Go through either door and follow the path up the stairs, then dispatch the templar at the top before flipping the triangular switch to open the large gate below. Drop down to the ground and go through the gate to enter the tower.

Head straight forward between two tech pillars and down a set of steps to a walkway, watching out for the crusader ahead of you. Go through the door behind it and take the lift down to the green floor, then keep going forward through another dragon door between two staircases. Flip the triangular switch at the top of the steps behind this door, then go up either of the staircases you just passed. At the top is a room with lifts on its east and west sides - you will need to use both to open the chamber in the center of the room which leads to the Bishop.

Lower the east lift and ride it up, then go through the doorway on the left and follow the path round to a room with several acolytes and computer screens. Flip the triangular switch on the south wall to open the wall next to it, then drop into the room behind it and flip the switch here to open some bars in the previous room. Now ride the lift back up and pull the switch on the stone pillar in front of you.

Backtrack to the room with two lifts and lower the west lift this time. Ride it to the top and go through the doorway on the right. The steps from here are the same - follow the path round to a room with several acolytes and computer screens, flip the triangular switch on the south wall to open the wall next to it, then drop into the room behind it and flip the switch here to open some bars in the previous room. Now ride the lift back up and pull the switch on the stone pillar in front of you.

With both switches pulled, backtrack to the room with two lifts and enter the central chamber which is now open. Press the skull-shaped switch here to lower a set of steps; go up these and then up another set of steps to enter the Bishop's chamber. Approach the north wall and the Bishop will be revealed; he uses homing missiles so keep moving and use whatever weapons you wish to destroy him. Once the Bishop is dead a spectre will emerge from his corpse; this creature uses Sigil blasts that can inflict heavy damage, so stay on the move and use your own Sigil to attack it (it is immune to all other weapons). Have healing items ready to use if the Sigil is draining too much health.

Once the spectre is destroyed, you will receive the second piece of the Sigil. You now need to return to the Oracle, which will involve backtracking through the tower, the bailey and the borderlands.

Under the sky, there are four ground level sections that are isolated by walls. All can be entered by dropping from the surrounding wall, but the two southern sections can also be accessed by lowering hidden lifts inside the citadel. Exit the northern areas by using the passages in the north and leave the southern areas by using the mentioned lifts. The following items can be found:

* The vertex count without the effect of node building is 2750.