MAP16: Gambit is the sixteenth level of Plutonia: Revisited Community Project. It was designed by Matt Tropiano and uses the music track "Kitchen Names (And Taking Ace)," a rearrangement by John Weekley (PRIMEVAL) of Doom's "Kitchen Ace (And Taking Names)" by Robert Prince. The par time defined in MAPINFO is 2:30. 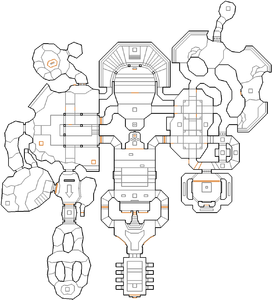 Map of Gambit
Letters in italics refer to marked spots on the map. Sector numbers in boldface are secrets which count toward the end-of-level tally.

There are no known bugs on this level.

This level was constructed in one week, using Doom Builder 2, SLumpEd, and MIDI2MUS.