MAP16: Hangman's Noose is the sixteenth map of Community Chest 3. It was designed by Matt Devlin (Shadow Dweller), and subsequently detailed and partially reworked by Eric Baker (The Green Herring). It uses the music track from MAP01 of TNT: Evilution. 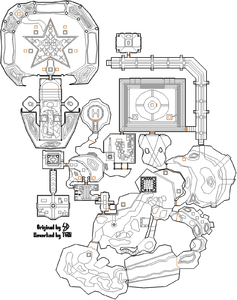 Map of Hangman's Noose
Letters in italics refer to marked spots on the map. Sector, thing, and linedef numbers in boldface are secrets which count toward the end-of-level tally.

The following multiplayer-only things have no flags set for any of the three difficulty classes, so they do not actually appear in the level: a shotgun (thing 471), a plasma gun (483), a chaingun (498), and a rocket launcher (500).

* The vertex count without the effect of node building is 6161.

The original, submitted level was designed using TNT: Evilution as the IWAD. Although it was converted to be playable with Doom II, the sky and music were chosen based on what the level used when TNT was loaded.