MAP16: Leave Your Sol Behind is the sixteenth map of Ancient Aliens. It was designed by Paul DeBruyne (skillsaw) and uses the music track "Space Jiggle," composed by Stuart Rynn (stewboy). The par time is 13:00.

Leave Your Sol Behind was featured in Doomworld's Top 100 Most Memorable Maps, placing 36th. 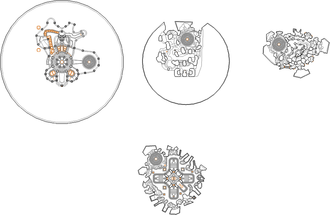 Map of Leave Your Sol Behind
Letters in italics refer to marked spots on the map. Sector, thing, and linedef numbers in boldface are secrets which count toward the end-of-level tally.

This map takes place on four separate worlds. Start by grabbing the weapons in front of you and dealing with the various enemies nearby: the set of stealth plasma aliens at the start, two mancubi on the center ring, a pocket of imps to the south, an arachnotron to the right of the imps, and a few revenants to the left. Walk up the steps next to either the arachnotron or revenants to find some hitscanners and another revenant guarding a switch. Pressing this raises the center ring, and you can reach this by following the path to the east of the pit. This will spawn alien guardians as you make your way to the northern end of the area. The northeastern section will provide access to a plasma gun, while the northwest has a lowered walkway. Behind you should be a set of stairs which takes you to the switch that raises this walkway. Follow the path around a couple of corners to find boxes of rockets and another switch which will raise another walkway you passed; but this switch also spawns Hell knights, demons, alien guardians, and arachnotrons.

Head down the second walkway to find a balcony overlooking the starting point. You may continue on to grab the supercharge at the end of the path, but this will spawn stealth plasma aliens above you. Pressing the switch on the balcony raises the center ring again and opens a gap to jump down. Grab the plasma gun if you have not done so already, then press the switch on the pillar next to the ring to lower it for access. Head east and into the UFO. Press the left button to be transported to the next world.

Enter the teleporter to beam down to the ice world. Here you will find the blue key, but first you will have to deal with the hordes in the valley ahead. Drop down and clear out the chaff, then head west and then north to find a set of stairs up to the cliffside. Follow this, and press the switch at the end to open a nearby wall with cacodemons and a pain elemental. Head in here and press the switch they were guarding to drop another wall to your right. This will take you to a teleporter and eventually to a switch that drops the blue key. Drop down and grab it, then ride the lift up and drop down again to reach the UFO. Make sure you're finished here (you cannot come back if you miss the secret), then enter the UFO and hit the blue switch to zip to the next world.

Step off the UFO to find yourself on the fire world. Our objective here is the red key, so follow the path while dealing with the various monsters dotting the area. There are stairs back up if you fall or get knocked off. Eventually you will find an alcove with a switch. Pressing this switch lowers the arena. The floor is damaging, so grab a radiation suit and clear the hordes. You will find the red key at the east end, flanked by Hell knights and mancubi. Grab it, and head to the red door in the south section, next to three boxes of rockets and a radiation suit. This will take you back up and out to the UFO. Get in and press the switch for the last world.

Exit via the teleporter and head up the path. Walk into this teleporter to find yourself in the central structure. Moving from the teleport destination will spawn four cyberdemons and various other enemies. Each of the nearby doors leads to a teleporter that will telefrag one of the cyberdemons. Once you've telefragged them all, walls will drop in the center with a few more Hell knights to deal with. Fight them, go through the teleporter to the southeast, and enter the door to the exit room.

* The vertex count without the effect of node building is 20002.