MAP16: Mancublood is the sixteenth map of 1 Monster. It was designed by Walter Confalonieri (daimon) with later edits by scwiba and Mark Pedersen (Macro11_1), and uses the musical theme of the level "Lunar Outpost" from Descent.

Like all maps in the megawad, the map features only one type of monster, in this case the mancubus. It is set in a technological base partially subverted by hellish influences, where the player will have to explore both dark claustrophobic corridors and bright open spaces. 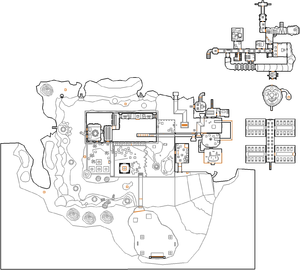 Map of Mancublood
Letters in italics refer to marked spots on the map. Sector, thing, and linedef numbers in boldface are secrets which count toward the end-of-level tally.

Press the switch to rise out of the pit. Enter the small door to the north, carefully walk through the broken window onto the ledge and grab the blue keycard (if you fall down into the sludge, use a teleporter to escape.) Head back to the starting location and open the blue keycard door. Ride up the elevator and continue forward until you come to an outside area with a conveyor belt. Enter the brick building to the north-east through its western door, then go upstairs.

In the hallway, go to the very end, drop down the opening into the blood-filled room, go forward and open the door to the left. Open another door here, head down, and get the yellow keycard. Go back into the blood-filled room, and enter the newly revealed teleporter. You will find yourself right in front of the yellow keycard door. Open it and get the red keycard.

Go down the hallway; near its other end is an elevator door locked with the red keycard. Open it with the switch, then use the switch inside to descend. Press another switch to open the door, proceed forward, and open the door in the outside area. Enter the portal. At the south end of this fleshy chamber is a hole in the wall, inside of which is a switch; shoot it and the blue skull key will appear on the steps, and an exit will open to the north-east. Head down the exit and teleport back to the start. In the outside area with the conveyor belts, there is a grey concrete block with burning torches on top, with a brown staircase allowing access onto it. Climb up this staircase, then up another, and descend the fleshy steps, being careful not to fall off the ledge, to access the blue skull switch. (Note that, as you teleport back after getting the blue skull key, a lift gets lowered east of you which conveniently allows immediate access to the blue skull switch, but just once.)

Pressing this switch opens a set of doors upstairs, allowing access to the small brick building, inside of which is the yellow skull key. Use it to open the door to the east. Go down the lift here and press the switch; it will lower the crate with the red skull key. Head back down to the brick building which you explored earlier. Now enter it through the red skull key door on its southern side. Open the door to the north, go down the stairs and press the switch at the end. This will open doors leading to several large rooms; press the red switch in the south-eastern one.

Go back outside, to the upper area where you found the yellow skull key. The switch you just pressed raised the bridge to the south and removed the obstacle blocking access to it. Head down the bridge and enter the giant portal to exit the level.

If you fall off the ledge where the blue keycard is, you will find yourself in a river of harmful blood. At both ends of the river are teleporters back up.

In the outside area with the conveyor belt, you can drop off the cliff to the west. Dropping off the southern part will land you on a small ledge with a stimpack.

The three conveyor belt sections outside (two western ones in the lower area, and the one in the upper area) are connected to each other with silent teleporters, providing a quick shortcut to the upper area from the lower.

In the long dark hallway inside the brick building, there is a number of optional rooms with some goodies, including a rocket launcher in the western bathroom. There is also a chainsaw visible in a storage room to the north, but it is inaccessible.

Dropping down the south-east corner of the upper outside area, you will find yourself on a small ledge with a teleporter back up. There is also a yellow skull key door here which is an alternative means of access to the building with the red skull key.

After you enter the red skull key door, there will be a door to the east, leading to side rooms with some health pickups and armor bonuses.

High above the northern end of the bridge leading to the exit, there is a vertical bar of dark squares visible hovering in the air.

* The vertex count without the effect of node building is 10215.

The map was partially inspired by Scythe's MAP17: Book Lords and the space levels of Duke Nukem 3D. The name of the map was suggested by the Doomworld forums user "sausage". According to Walter Confalonieri, Mark Pedersen created "a good 70%" of the map.