MAP16: Mob Quad is the sixteenth map of 2048 Unleashed. It was designed by Mithran Denizen and uses the music track "Bye Bye American Pie" by Robert Prince. 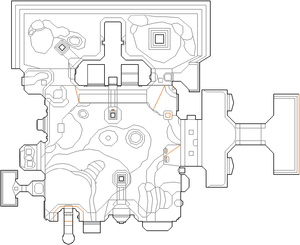 Map of Mob Quad
Letters in italics refer to marked spots on the map. Sector, thing, and linedef numbers in boldface are secrets which count toward the end-of-level tally.

You start facing an open field that contains a number of monsters, including many zombiemen on I'm Too Young To Die (ITYTD) and Hey Not Too Rough (HNTR) skill levels or demons on Ultra-Violence (UV) and Nightmare (NM). Take the berserk pack in front of you (and an armor on ITYTD and HNTR) then head east up a set of steps with health bonuses to find two switches guarded by demons, along with two Hell knights on UV and NM. The south switch requires the red keycard, while pressing the north switch lowers a lift in the north-west corner of the field. Approaching this switch will open a closet to the north containing cacodemons, and a second closet next to the lift containing (depending on skill level) an imp and a knight/revenant.

After riding the lift up turn right and follow the path round - watch out for a closet opening on your left to reveal arachnotrons and/or imps as well as an assault by flying monsters when you get close to the red key. After taking the red key, deal with the cacodemons (and pain elemental on UV and NM) that attack from the north then return to the two switches you found earlier and press the south switch, which will raise a set of steps in the water pool in the south-west corner (armor bonuses will appear on the steps to guide you). Climb the steps and kill any waiting spectres then approach the southern tech wall between the exit signs to open it and reveal a passage. Kill the demon (or spectre on UV and NM) behind the wall then step into the passage to finish the level.

An armor is sitting by a dead tree in the middle of the field. On ITYTD and HNTR this is replaced with a megaarmor.

* The vertex count without the effect of node building is 1537.