MAP16: Mutual Destruction is the sixteenth map of Alien Vendetta. It was designed by Brad Spencer and uses the music track "Waltz of the Demons" from Doom. 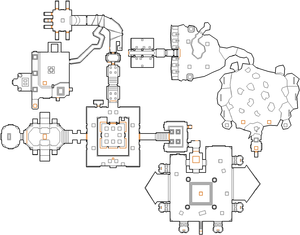 Map of Mutual Destruction
Letters in italics refer to marked spots on the map. Sector numbers in boldface are secrets which count toward the end-of-level tally.

Right from the start you will get ambushed. The shotgun guys provide an initial folly while some zombiemen teleport in. Kill everyone and enter the hub. Here, your first goal is to head north towards the next door. But first, head around past the demons to get a super shotgun, but watch out for the barons of Hell when you grab it. Now enter the north door and use the switch to lower the lift to the next hallway. There are quite a lot of monsters in here, including a sneaky shotgun guy from a tiny room just to the east. You cannot open the door here, but you can go through the fence through a tunnel leading to a pool of nukage. Drop in and take the teleporter to reach solid ground, then go right. Here there are two computer panels. Use the one that is furthest from you, as the one closest to you will trigger some more monsters (although you can get a soul sphere for your troubles). Then, take the teleporter you had came out of to go back to the hallway, this time with the door open. In the next room, you can directly open all of the doors here, and a Hell knight and some supplies are behind each door. The one you want is the center left door, as it contains the blue key. Grab it, and grab the plasma gun that appears behind you. Now backtrack to the hub.

There will probably be some demons running around so kill them. Go through the blue door which is on the western side. Pass through the next room towards the next door, approaching it reveals an arch-vile and the yellow skull key. On your way back are four barons on ledges and imps teleporting in, so dispose as necessary. Back at the hub, take the door on the east side which is the yellow door. The blue room just behind it will expand further, watch out for the revenants. When it is all clear, open the northeastern blue wall and press the switch behind it to open the southeastern blue wall. Use the switch to lower the lift and go down. Entering this room and grabbing the shotgun opens the rest of the room revealing a cargo bay with an arch-vile and demons. Grab the invulnerability and this will open six compartments, each with a cyberdemon and a switch. Quickly take out the cyberdemons while the invulnerability is in effect, and press all of the switches in their compartments. When all switches have been pressed, go south to a teleporter to teleport to a hellish area. This destroyed area has a few revenants and mancubi on walls, plus a couple of cacodemons in the lava. You will need to traverse the platforms above the lava, heading northward to the other side. Once there, you will find yourself near an underground fortress, with chaingunners on the walls. Kill them, and when you approach the entrance, some demons will teleport in. Kill them as the bars lower, and then exit the level.

* The vertex count without the effect of node building is 2647.