MAP16: Newburgh is the sixteenth map of Doomworld Mega Project 2016. It was designed by Rorix and uses the music track "Something in the Cave?" composed by Bjørn Lynne. 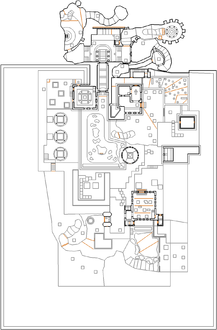 Map of Newburgh
Letters in italics refer to marked spots on the map. Sector numbers in boldface are secrets which count toward the end-of-level tally.

Sectors 266 and 673 are tagged 64 and 65, respectively, and are supposed to have cacodemons teleport in from different teleporter closets. However, these two sectors lack teleport destinations, which means that cacodemons never teleport in.

* The vertex count without the effect of node building is 3813.