MAP16: Predatorium is the sixteenth map of Plutonia 2. It was designed by Adolf Vojta (Gusta), and uses the music track "Come Out Fighting" by Eric Baker (The Green Herring). The par time defined in MAPINFO is 2:30. 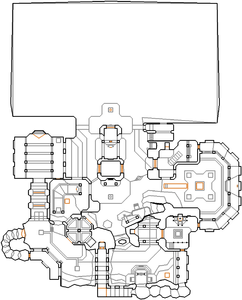 Map of Predatorium
Letters in italics refer to marked spots on the map. Sector, thing, and linedef numbers in boldface are secrets which count toward the end-of-level tally.

You will have to contend with a lot of enemies around you at the beginning. There is a shotgun straight north of your starting point and a super shotgun to the northwest. If you are having major troubles, head into the building north of your starting point, and lure the revenants out of there so you can acquire an invulnerability, a soul sphere, and some boxes of shotgun shells. You can get the keys in any order you wish.

You will see a red key at your starting point, but it is not accessible. Instead, head southwest of your starting point into an octagonal room, where Hell knights will attack. Keep heading southwest, then in the next open area, head northward to reach the red skull key. All the while watch out for monsters that ambush you, and be mindful about the walls opening once you pick up the key.

From the building north of the starting point, open the eastern door. Head downstairs and open the next door, into the C-shaped veranda with chaingunners. A gargoyle switch is in the middle of the veranda. Press it, and the demonic block behind you will lower. A cyberdemon will attack you while lost souls converge in on you. Fend off everyone, then go back the way you came. Back at the northern building, head southeast, across the bridge to the yellow key, looking out for monsters appearing on the teleport pads as you grab it.

The blue skull key is in the southern section of the map. You can get to it from any direction, but when you do, head for the back alley way with former humans on it (be careful if you are coming in from the west as chaingunners would ambush you). The blue key is guarded by a lone baron of Hell.

Once you have all three keys, go to where the blue key was and find the blue bars that are to the west of it. Open them and flip the switch inside. Go back to the octagonal room that had Hell knights inside and you will find the southeast and northwest doors are opened. Pick up the BFG9000 from the southeast, then head northwest, taking the teleporter to appear up top where a few arch-viles are (unless you killed them already). Hit the gargoyle switch with red bars around it, then jump out the window to the north, appearing back near the starting point. You should see another gargoyle switch, with yellow bars around it. Press it to open up the exit, then head through the northeast room (formerly blocked by red bars) and then around to reach the exit. Press one final switch to lower the pad to leave the level.

It is possible to reach the exit from the beginning, by utilizing an Arch-vile jump technique.