MAP16: Scout Bay is the sixteenth map of Daedalus: Alien Defense. It was designed by Andrew Griffiths (Hungry Donner) and uses the music track " ". 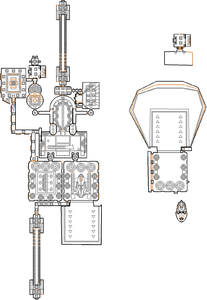 Map of Scout Bay
Letters in italics refer to marked spots on the map. Sector numbers in boldface are secrets which count toward the end-of-level tally.

Enter the door on the east side of the room, and follow the small narrow corridor into the power room. The door at the other end leads to a smaller room containing a Hell knight, a rocket launcher, rockets and a switch. Trip the switch, and it will give you a camera's eye view of the Cryonics power room, which is now accessible. Return to Secondary Bridge via Brig and Storage.

Go through the exit from the travel tube, and follow the stairs and corridor down to two doors, which lead to shuttle bays. Go through the door which is not broken; this leads to the bay containing the captain's scout ship.

The inclines on the ship are shallow enough for it be climbed on - to enter the ship itself, stand on the hatch on the west side. Open the door at the bottom and watch out for the Hell knight at very close quarters. Go into the engine room (marked by green arrows, and the only other working door), kill the other Hell knight and activate the charging booth, which will give you permanent knowledge of the alien language. Activate the panel with three triangles and you'll get a message saying that a functional microgen is needed. At the same time, your ally hacks into the computer system in such a way that it allows you to steal the microgen from Cryonics. Return to Storage via Secondary Bridge.

Enter the scout ship again, and replace the microgen. Activate the panel with three triangles and the engines will power up. Go to the front of the ship, and watch as the ship launches into the great beyond.

Much of this map is optional as far as making progress within the game is concerned. The bulk of it can be accessed via a horizontal travel tube in Storage.

* The vertex count without the effect of node building is 11355.

In early beta versions, this map was called "Their Engine Room".