MAP16: Spirit World HQ is the sixteenth map of Community Chest 2. It was designed by Gene Bird, and was originally released standalone as part of his Blind Alley series. 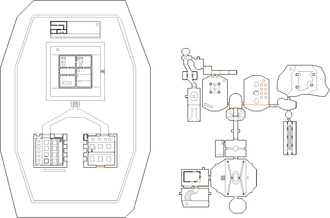 Map of Spirit World HQ
Letters in italics refer to marked spots on the map. Sector, thing, and linedef numbers in boldface are secrets which count toward the end-of-level tally.

Enter the building northeast of where you start, and run to the skull in the northeast corner. Press it, and a door will open at the opposite wall. Grab the loot and press the switch to open the northern door. Exit, and rush into the opposite building, which is now accessible. Press the "Poison" sign at either the northwest or southwest corners, and a lift will rise at the southeast. Take the lift, run north, and jump across the crate stacks; when you jump from the wide crate stack to the first one, a switch will lower from the ceiling over the last stack. Flip it, and exit the building. Climb up the stairs at the center of the area, and go around the east side to find that a new stairway has been created. Ascend it, go around to the west side, and open the door. Open the northern door, and go through the next two doors. Jump down to the bottom floor to find the red key. Press the nearby switch to create a lift. Take both lifts back to the higher level, and head outside again. Go to the northwest of the area and open the red door. Open the skull-covered wall and hit the switch at the southeast end. Head through the doorway and use the lift. Open the door outside, and enter the teleporter at the northeast.

Now, at your destination, hit the eastern switch to raise a stairway. Climb up and open the northern door. Open the door immediately after it, and hit the switch in the southwest of the room. Leave through the eastern doorway, hit the northern switch in the next room to raise another staircase, and ascend it. Jump down to the east side, hit the northern switch to open the door nearby, and take the lift. Head north, go through the next two doors, and descend the steps on either side. Enter the next, vine-covered room, and open the western door. Head through, and step into the teleporter in the northeast corner. Hit the switch you land close to, raising steps into the northern corridor, and head toward the northwest "door" to be dropped into a stone tunnel. Open the next door, and head on until you find another door. Go through it, and hit the switch at the south of the next room.

Backtrack to the vine-covered room to find another door at the east side; open it to find a room with stacks of oval-shaped crates. Run to the northeast corner, grab the items at that location (or step into where they rest,) and a lift will raise at the west of the central stack. Use it, and walk onto the stack; a switch will lower right next to you. Use it, and head through the new doorway in the southeast corner. Open the door in the next room, and grab the yellow key at the northwest of the next one. Backtrack through the doorway to find another door at the south end; open it, go through the door after it, dash through the hallway, and hit the switch.

* The vertex count without the effect of node building is 1549.