MAP16: Stoned is the sixteenth level of Memento Mori. It was designed by Kurt Schmid, and uses the music track "Galaxy" by Mark Klem. 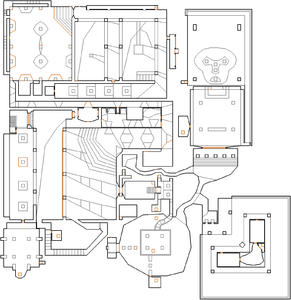 Map of Stoned
Letters in italics refer to marked spots on the map. Sector, thing, and linedef numbers in boldface are secrets which count toward the end-of-level tally.

Open the door and kill the zombies in the hall. Head all the way down the hall, as the stuff in the outdoor sections is optional. At the end, hit the lion switch near the door to open it, into a very large room. In here, stepping around certain things causes several lifts to lower, possibly releasing monsters and revealing nooks with supplies in them. You need to reach the southwest corner, and all you have to do is flip the switch to lower the southwest lift. Take it up, and follow the long hall all the way until you see a soul sphere in a corner and a door to the right. Take this door into a dark room. There is a nearby light switch you can press. Go to the end of the room and flip the switch on the north wall, then leave the room and continue down the hall until you climb to an open area. There is a door here, along with a wall to the south with hanging legs near it. Remember this location for later, and take the door. Step on the light panel in this room to raise a staircase, then get the megaarmor for the ground to lower. In the room with the blue torches, head for the southeast exit, going up the stairs. If you get the blur artifact, look out for spectres that appear. To your right, you can spot some blocks to the yellow keycard. Hop on them and get the key, but look out for shotgun guys, plus the key will disappear. The switch in the northern closets raises some blocks to the south of the blur artifact. Traverse these blocks and open the wall to find some health and a radiation suit. The teleporter takes you into the lava. Maneuver through the tunnel and head right from the yellow bars, to a room with two pits. Hop in either one, and you will appear near a building. Enter it with the entrance you see, and go through it until you find another yellow key and a switch. Flip it, then head back one room and look for a wall with candles in front of it. Open it to find a teleporter taking you back.

The switch you flipped lowered the yellow bars, so go back there and head towards the very large door in the back. Open it to a very large room and go towards the defunct Icon of Sin. Press the switch to lower a lift and ride it up. Head over to the right side, then south until you find an opening on your left. Follow it into a courtyard with chaingunners and two arch-viles. Look towards the western wall and spot one that is brighter than the rest. Open it for a medikit and a teleporter. You will appear on a ledge with a blue keycard so take it, and drop back into the Icon of Sin room. Take the lift again and head for the left-hand side this time. There are a lot of candles in front of a switch here, so press it to find a teleporter. Take it and you will wind up in the room above lava where the blur artifact was. With the blue key, head back down the stairs to the room with two blue torches. Head to the northwest side of the room with the blue door and open it for an imp and a switch. Then go to the southwest corner to find a red keycard and a teleporter. Take the teleporter to appear in the room just after the open area, then go back to the open area. Look towards the wall that has bodies all over it, Follow them to the right until you find a cacodemon and an open passage. Follow this passage until you reach the water, then go all the way until you see some red bars to the left. Open the red door on the right and hit the switch to lower those bars, then head through the big door and climb the steps to the next door. In the terrace ahead, if you attempt to get the megaarmor, a wall of chaingunners appears to your right. Head through the exit door and press the switch to be confronted with several caged barons. The exit is straight ahead.

For years, it was considered impossible to obtain 100% Secrets on this level due to secret #9 being impossible to register, with 90% believed to be the maximum percentage possible. However, in his April 14, 2000 review of Memento Mori [1], Andy Olivera stated in his description of this level that "contrary to popular belief, you can get 100% Secrets." Eventually, on March 14, 2002, Anthony Soto utilized information from both Olivera and Adam Hegyi to perform his record-holding UV max run of this level, in which 100% Secrets is finally obtained in a demo recording. As indicated above, to obtain secret #9, you must not trigger the stair-raising switch in secret #5, or the secret will not register due to being too narrow for you to step on without climbing up one of the stair steps.

* The vertex count without the effect of node building is 1757.