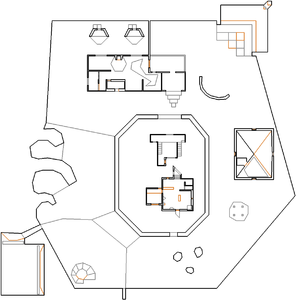 From the start, walk straight ahead and go through the door just around the corner. The outdoor area you'll arrive in consists of two small buildings inside a tall, circular, black barrier wall, as well as several buildings outside the wall. There are two exits in the black wall; go through either and make your way to the nukage pond in the southwest corner of the map. In the pool is a wooden structure with some stairs leading up to the blue skull key. Upon picking the key up, a large number of monsters will teleport in, so be prepared.

At the north end of the map is a grey brick building; walk up the stairs in the corner and go through the lion-faced door around the corner at the top. Inside is a glowing blue/red wall as well as a blue key door. Open the blue door and pick up the red skull key inside. Next to the red key is a satyr face switch. Flip it; it lowers the glowing blue/red wall in the previous room, revealing a hidden teleporter. Run to it quickly, as it only lowers for a short time period. You'll be taken to an otherwise unreachable platform with some likely useful plasma guns.

Once you're ready to exit the level, make your way to the structure made of several black and gray "cubes" in the northeast. The two platforms with the more rectangular-shaped patterns on them lower like lifts, allowing you to access the highest ledge. Once you reach the top, turn around and lower the second lift platform again (while still on the top ledge). This causes the wall of the ledge you're on to lower as well, revealing the exit teleporter blocked by a red skull column; open it using your key and exit.

Bug in the Xbox port of the game[edit]

In the Doom II port found in the Xbox version of Doom 3/Resurrection of Evil, if too many monsters are on the map and a game is saved and later restarted, it runs the risk of freezing upon loading it, resulting in needing to reboot the Xbox system entirely and starting the game anew.

The super shotgun can be bumped from outside the building it is housed in, which is useful both in single player and deathmatch.