It was the nineteenth map to be submitted to the project, arriving over seventeen hours into the session. According to the author, it took an hour and a half to build, and was their third attempt at creating a map for the project. 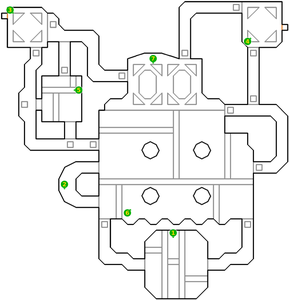 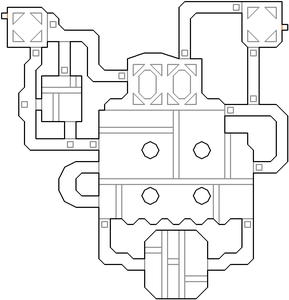 Swiss Salami is a large level that takes place around a brick fortress. Two smaller courtyards can be found in the north-west and south of the map, and a larger courtyard makes up the centre. The courtyards are connected by a network of brick hallways, with a single outlier in the form of a horseshoe-shaped passage in the west of the map, connecting the main courtyard to itself. This passage contains a rocket launcher and two rocket boxes, as well as a player spawn point.

The smaller courtyard in the north-west contains only a super shotgun on the path, and a box of shells in its south-west corner. The courtyard at the south of the map contains a plasma gun with some energy cells at its centre, with an energy cell pack off to the eastern side.

Health and ammo can be found in moderate amounts throughout the map, with several backpacks and stimpacks to be found throughout the hallways. Decent quantities of ammo can also be found around the four large columns in the main courtyard, as well as a green armor sitting between them.