MAP16: Tech Base: Sector 10 is the sixteenth map of 10 Sectors. It was designed by Michael Niggel (Risen) and uses the music track " ". 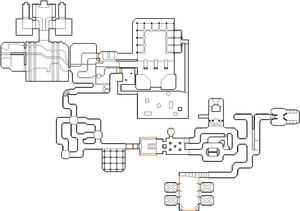 Map of Tech Base: Sector 10
Letters in italics refer to marked spots on the map. Sector, thing, and linedef numbers in boldface are secrets which count toward the end-of-level tally.

Head forward killing the zombiemen and then take the lift up to the balcony level. Go until you find a fork, turn south and you will find a three-way fork here where you can go down, straight ahead, or around into a tunnel network. For now, head through the tunnels leading south, and keep going until you reach the blue door. The room next to it holds the yellow keycard. Now backtrack to the first fork you saw, and take the path that leads to the yellow door. Take the path beyond it until you reach the red keycard. There is a super shotgun and a rocket launcher in the room below, so take them and run back, using the lift to reach the three way again. This time, take the red door to the east. The path beyond this door eventually reaches the blue keycard.

Now go back to the tunnel network where you found the yellow keycard, and open the blue door now. Drop down into the next room, where you will see ten switches. The switches on the northern wall raise the steps up so you can proceed east. The switches on the southern wall lower the steps, in case you make any mistakes. To solve this puzzle, on the northern wall from left to right, hit switch 1 once, switch 2 twice, switch 3 thrice, switch 4 four times, and switch 5 five times. At the top, kill the enemies. You will notice that the door here requires six keys, not just the three keycards you have already. You can get the skull keys in any order.

Of the two paths going east, take the northern one. There should be a brown entrance, and the yellow key is right there.

This key is in the easternmost section of this area, guarded by revenants and a baron of Hell (or arch-vile on Ultra-Violence or higher).

You will find this key in the southern part of the map. Enter the room here to find a ton of monsters to kill. Now press on the lever switches in this room. This will lower the monster closets so you can fight more enemies, but will also lower the steps to prevent you from escaping. The red skull key is sitting in the northeast closet in this room. To get out, you need to flip the switches on the southern wall to raise the steps, in the same manner you used to reach the exit door before. From left to right, hit switch 1 five times, hit switch 2 four times, hit switch 3 three times, and hit switch 4 twice.

To reach the exit door again, find the path closest to the yellow skull key and you should find a lift to head back up.

Near the yellow skull key, there is a wall with some holes in it. Press this wall for shotgun shells, ammo clips, and an armor.

As this map contains no proper secrets, the NM100S category is redundant for this map.

* The vertex count without the effect of node building is 1726.