MAP16: The Chapel of Black Granite is the sixteenth map of Hell Revealed II. It was designed by Sam Woodman, who also wrote the music track for this level, "Ambience II". 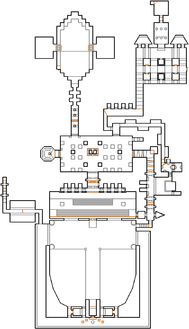 Map of The Chapel Of Black Granite
Letters in italics refer to marked spots on the map. Sector, thing, and linedef numbers in boldface are secrets which count toward the end-of-level tally.

A cyberdemon greets you at the start. Run forward getting rid of chaingunners and imps if necessary, then take the small path to the right. Ride the lift up and take the next door, following the next hallway to a lift, killing revenants and imps as you go. At the top, kill the imps and be wary of the baron trap that springs before the next door. You will find a big hub with a lot of Hell knights. Take the northern door with metal panels for a corridor of chaingunners. Follow this corridor to a lift leading down into a tiny room. Inside, bars will block you for about thirty seconds while a window opens with a few arch-viles. Fend them off until the bars open. Open the door, and you should see a switch above a hallway that you have already explored. Shoot it, looking out for the chaingunners from behind, then return to the chaingunner corridor. There is a new opening, follow this hall for some chaingunners and some caged arch-viles. Some stairs will lower as you proceed, where you will fight mancubi and cyberdemons in a tight room. Press the lion switch on the east wall of this room, then press the southwest, northwest, southeast, and finally northeast switches to raise a step to the north, allowing you to jump to the next area. Be careful when you jump, as there are arch-viles present below. Down here is the yellow skull key; flip the switch to appear in a room of revenants and a teleporter back to the hub.

The teleporter takes you in front of the yellow door, so open it and kill the mancubus, then open the next door. Here you will have to tangle with spider masterminds, arch-viles, and imps. The blue skull key is in this room, and to get it, take the lift to the left, then follow the ledge to get it. Now return to the hub and open the nearby blue door. Kill the nearby arch-vile and watch as stairs lead up to a lion switch. Pressing it opens up the central structure in the hub, which you can open up directly for another switch to flip, gaining access to the red skull key. Proceed further and your way back is blocked while the wall in front lowers. Go down the stairs to the teleporter where the first cyberdemon was, and it will be blocked off while revenants teleport into the area. Deal with them, then climb the steps back up and you will find a switch, reopening the cyberdemon teleporter. Open the red door and follow the corridor, being mindful of a nasty ambush midway through. You will find yourself outside with a bunch of demons. Follow this path until you find a demon face and a flickering arrow pointing to it. Press on the face and flip the switch behind it to exit the level. 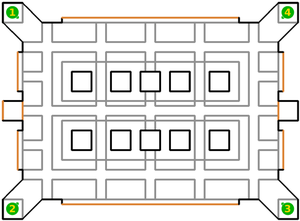 * The vertex count without the effect of node building is 1877.