MAP16: The Nephilim is the sixteenth level of Memento Mori II. It was designed by Denis Möller and uses the music track "Outstretch of Sin" by David "Tolwyn" Shaw. It contains a separate area for multiplayer competition.

Sector 16 used to be a big hightech area, dedicated to research of new teleporter facilities. Contact to this region lost a week ago, detailed information follows.

The guy we sent into sector 16 didn't make it back; all we know is that the enemies came in from the west. Reports say that there seems to be a real big enemie [sic] somewhere, but we don't have any further info on this. The picture was one of the last received, vital signs suddenly disappeared a few seconds after transfer.

Primary mission target:
Teleport into this sector, eliminate all enemies and find your way back, report what happened to our troops and what's left of the computers.

Secondary mission target:
Find out more about that big enemy. 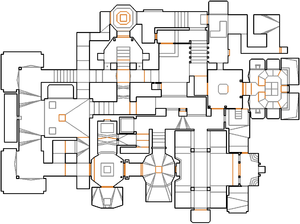 Map of The Nephilim
Letters in italics refer to marked spots on the map. Sector, thing, and linedef numbers in boldface are secrets which count toward the end-of-level tally.

You start off in a small room with a teleport pad. Collect the shotgun and two sets of 4 shotgun shells, then open the door ahead. The octagonal room ahead has up to three shotgun guys, with a couple more former humans taking potshots from the exit room (visible through a window ahead). Use the walls next to the door to dodge and return fire. Once they are down, open the door to the west, kill the chaingunner ahead and proceed along the corridor.

As the corridor turns to run north-south, you will find that it is infested with shotgun guys and imps. Back off and try to cause some monster infighting, while picking them off with your shotgun. Grab the super shotgun in the middle of the corridor and continue northwards. The corridor will turn east before heading down a flight of steps into a square of water. When you reach the square, check behind the bars to the north and south for imps. As you proceed towards the silver structure ahead, check for imps (and on Hurt me plenty and above, shotgun guys) behind a barred alcove in the north. Press use on the silver structure to lower its bottom half, and a number of enemies from a room in the east may approach you - back off and use the chaingun to deal with them. As you continue forward, look out for another barred alcove in the north that probably has a shotgun guy waiting in ambush.

Step over the raised brown platform and enter a large grey room. Clear the cage on the southern wall of imps, and any remaining cannon fodder to the north. You should also pay attention to up to three chaingunners behind the two sets of bars to the east. Once the coast is clear, head through the door to the north and shoot out the shotgun guy and imp (Ultra-Violence and above only) to the east. Go through the door to the west and clear out a small group of enemies (watch for the chaingunner or two in this group). Go all the way east up a flight of stairs before jumping off a ledge into a darkened area with computers. Kill a shotgun guy and an imp (if any), then find the passageway in the southeast blocked by barrels. Blow the barrels up, then continue down the hallway before carefully blowing up a second pair of barrels. Done correctly, this should blow up the demon (Hey, not too rough) or pain elemental (Hurt me plenty and above) in the room at the end of this corridor. Collect the rocket launcher from this room.

Backtrack west to the lit part of the room, head south and flip the switch on the east wall. Next, ride the silver platform up, then drop off to the north and head up the steps. However, once you cross the pair of metal stripes in the south, a new set of former humans and imps will be released into the cage on the southern wall. Back up a little, and put a rocket or two into the cage to put a quick end to the matter. Some imps and shotgun guys (up to four of each) will also be released behind the bars to the east, so switch to the shotgun and be ready.

Head back up the stairs and open the brown door at the end. You will see a room with a central pillar and immediately alert a Hell knight (Hey, not too rough and lower) or a baron of Hell (Hurt me plenty and higher). Don't enter the room ahead yet - lure it out of the room and fight it one on one. When it is dead, step into the room to alert another Hell knight (Hurt me plenty and below) or a baron of Hell (Ultra-Violence and above) waiting to the left. Again, pull it out and kill it.

Now, you can collect the red key from the alcove in the west.

Enter the red door in the south. Watch for shotgun guys behind the window in the east and the Hell knight in the western end of the corridor. Carefully proceed west, slowly picking off any former humans or imps you see. Do also check the window behind you (north) for enemies that were not blown up when you fired the rockets into the imp cage.

Head south into a hall that is partially open air. Use your chaingun and clean up the stragglers, but do be careful of the two shotgun guys (Hey, not too rough and below) or chaingunners (Hurt me plenty and above) behind the windows next to the green door in the east. Approach the door in the east, and part of the computer panel to the west will open up to reveal a switch. Flip the switch and immediately turn around to confront a demon (Hey, not too rough and below) or a revenant (Hurt me plenty and above). With the green door open, rush in, grab the blue key and immediately back out. A trap is opened in the blue key room, as well as a smaller one in the south of the hall. In total, you are facing:

The super shotgun and chaingun will handle these traps together. Re-enter the blue key room to open the traps, then rush into the one at the south of the hall to collect a plasma gun, which will come in really handy later.

Backtrack north to the room with a central pillar, then go through the blue door in the east. This room seems completely quiet with nothing but a teleporter in the back. However, as you walk in further, the room radically changes, with a set of staircases forming and windows opening up. More problematically, a lance of former humans will appear in the middle of the room, with a chaingunner in the middle. Traps on the north and south wall will also open, releasing shotgun guys (Hey, not too rough and below) or chaingunners (Hurt me plenty and above). Up to four lost souls will also enter the room. Dispatch the enemies, climb the stairs and enter the teleporter.

This takes you to an oval room in the south of the map, with a nasty ambush. Clear out the imps around you, then focus on the two nasties in the trap to the south:

Your plasma gun will rip through the contents of this room, cells permitting. Exit this room through the blue door in the west.

You will now be back in the room just north of the starting room. Walls have opened in the western corridor, releasing a mix of enemies with up to two chaingunners and four mancubi among them. Part of the western corridor has also sunk away. Drop into this new hole to access a water-filled area. Lure any remaining imps into the corridor forward before proceeding into the main water-filled area. When you reach the main water-filled area, a trap will open in the north wall, with two demons accompanied by two imps (Hey, not too rough and below), an imp, a chaingunner and a revenant (hurt me plenty), or a chaingunner and two revenants (Ultra-Violence and above). At the same time, you will be subject to potshots from the enemies in the corridor from the bars in the west. If you can anticipate this situation, you can clear the trap on the floor, with well-placed rockets, and then dedicate your attention to the enemies up top.

Press use on the silver column to lower the yellow key for collection.

Head up the stairs to the east. Two imps (Hey, not too rough and below), a revenant and an imp (Hurt me plenty), or two revenants (Ultra-Violence and above) await you just before the silver structure. Press use on the silver structure to raise its top half, kill the cacodemon (Hey, not too rough and below) or pain elemental (Hurt me plenty and above) and proceed forward through the yellow door into the teleporter.

You will be back in the room north of the start room, where a teleporter pad has suddenly appeared. The bottom half of the window to the exit room has lowered, allowing you to access the exit room. Fend off the nine demons that come teleporting in, but don't back yourself into the exit room - the back half of the exit room is rigged with a fake floor trap, and you could end up in the clutches of a Hell knight (two imps on Hey, not too rough and below).

Flip the switch in the exit room to exit the level. 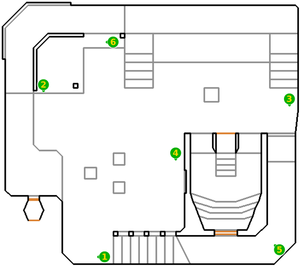 In the east of the map, entering a supposedly empty room suddenly causes parts of the room to open up, a staircase to form and the teleporter in the back of the room to rise to the top of the staircase - all almost instantaneously. This effect is achieved by "stacking" nine linedefs with the various actions necessary to create these effects on top of each other near the entrance of the room. When the player enters the room and crosses that line, all nine actions will be triggered at the same time.

Near the end of the map, the player will teleport back to the room north of the start room, and part of the floor (sector 4) will have suddenly turned into a teleporter pad. This uses a W1 Floor Raise to Next Highest Floor (Change Texture) with a control sector outside the map, but there does not seem to be any teleporter flat near the triggering linedef (linedef 425, near the northern teleporter), which is required to effect this change.

The trick is the use of a thin fake floor sector in front of the triggering linedef. Sector 108 is a very narrow pit lowered to -256 with untextured sides. The front sidedef of linedef 425 is tagged to this sector. Due to the fake floor effect, this pit is invisible, and it is too narrow for the player to fall into. The real floor of this sector has the GATE3 texture. Thus, when linedef 425 is triggered, sector 4 will rise, and the sector's flat will be that on the front sidedef of linedef 425, which is the GATE3 texture.