MAP16: The Omen (The Plutonia Experiment)

MAP16: The Omen is the sixteenth map of The Plutonia Experiment. It was designed by Milo Casali and uses the music track "Untitled" from Doom. 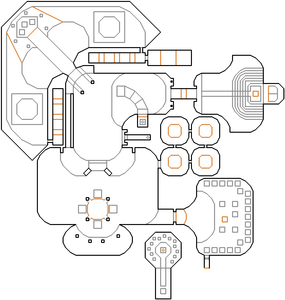 Map of The Omen
Letters in italics refer to marked spots on the map. Sector numbers in boldface are secrets which count toward the end-of-level tally.

There are three keys in the level. The red and blue ones can be obtained at any time. The yellow key is behind the door requiring the blue key.

You begin on a quadrant-shaped flight of steps. As you step down, you face three shotgun guys on a ledge, a cacodemon and after you turn the corner, up to three revenants. Do be careful as the revenants have a tendency to move to the part of the ledge where the shotgun guys were.

Once these monsters have been handled, collect a BFG9000 near the shotgun guy ledge and proceed to the "lift" in the southern part of the slime. When it is lowered, run through to the blue key area, but do not collect the blue key yet. Instead, kill the three spectres and two imps waiting in ambush. Only then do you pick up the blue key.

The "lift" moving up and down makes it hard to escape the area. Circle around the enemies and destroy them with a heavy weapon.

Step on the aforementioned "lift" and ride it up. You are now on the ledge where the shotgun guys and revenants were. Walk through a tunnel of health bonuses, then turn left. You should be able to see the red key at the end of a walkway. Beware of the two chaingunners ahead. As you shoot them down, you will wake up four cacodemons, and two arachnotrons will be ready to fire on you as you move further along the walkway. It is suggested that you deal with the cacodemons first, then the arachnotrons.

As you step onto the red key, another teleport trap is activated:

Due to the extreme danger of this trap, it is quite likely a good time to deploy the BFG9000 you have collected to clear the entrance to the walkway and escape. Use the corridor where the health bonuses were to funnel the revenants for easy kills.

Return to the starting area and go further east. Open the blue door. You will face four (Hey, not too rough and below) or six (Hurt me plenty and above) spectres. On Ultra-Violence, there are also two chaingunners flanking the door in an ambush position. Once you have killed them, head down the steps to the yellow key.

As you step onto the yellow key, immediately turn around. An arch-vile will teleport near the door of the room. As this room has no cover at all, you must kill the arch-vile fast, or heavy damage is inevitable.

Return to the blue key area. On Hurt me plenty and above, there will be an arch-vile who teleported here when you grabbed the yellow key, who has probably resurrected a few enemies. Kill them all, then head to the yellow door in the southeast corner of the area.

You now enter a room with many lifts and face a massive army of former humans, (24 on Hey, not too rough and below, 36 on Hurt me plenty, 51 on Ultra-Violence and above). If you still have cells, a BFG blast will make short work of them. Kill any stragglers, then look for the lift in the southwest corner of this room. Ride it up to an alcove in the south wall. Raise the red bars, then flip the switch behind. This lowers the central post in the room, which is actually a teleporter. Quickly exit the alcove and get into the teleporter. You will be teleported to a final room.

In the final room, enter the teleporter to end this level. Do not fall into the slime here, as you cannot get out (see "Bugs").

The exit room is surrounded by an inescapable slime pit (sectors 95 & 96). However, this pit has not been assigned any damaging floor actions, and the linedefs surrounding the pit are not flagged as impassable, so if the player falls in, they will be permanently stuck unless they load from an earlier save or use cheat codes.

It is possible to exit the map without the red key, as one of the moving pillars rises high enough for you to reach the teleporter to the exit.