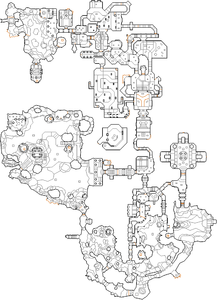 Map of The Spooked
Letters in italics refer to marked spots on the map. Sector, thing, and linedef numbers in boldface are secrets which count toward the end-of-level tally.

As soon as the level starts, go around the crates on your right to find some small boxes that you can climb over to find the blue keycard. A wall with a shotgun on it will have lowered behind you to reveal some imps guarding a backpack; kill them then head east through a door requiring the blue key and kill the shotgun guy waiting behind it. Enter the next room and kill a cacodemon that appears in front of you, then climb the steps and go through the doorway at the top. Head east past several monsters and you will reach a room with a walkway curving round a blood pool. Follow the walkway round, collecting a chaingun on the way, then follow the passage past two demons to an area with one or two cacodemons in a central blood pit. Climb the stairs by the south wall then turn right at the top and press the switch in front of you.

Pressing the switch will lower a wall behind you and reveal two demons, plus three shotgun guys on Hurt Me Plenty (HMP) skill level or higher. Go into their alcove and follow the passage past two shotgun guys and a lost soul to a room with a Y-shaped bridge. Head east across the bridge into a tunnel with two lost souls and follow it until you reach a metal barrier blocking the way, then go back to the bridge to find that part of the south wall has lowered. Go through it and press the skull switch, which will teleport you into a red cavern facing two or three cacodemons (plus a pain elemental on Ultra-Violence (UV) and Nightmare (NM) skill levels). Head south and start climbing the rock steps, looking for a doorway on the left with a chaingunner.

Approach the doorway and kill the demons you can see through it, then step through and turn round to kill three shotgun guys that are revealed behind you. Follow the passage round the corner to a lift and press the skull switch to be carried down to a ledge, then turn left and left again to go through a doorway. Kill two or three chaingunners then head north and follow the passage until you see another doorway on the left - kill the waiting revenant, then step through the doorway to lower a wall behind you and reveal another revenant guarding a skull switch. Press the switch then go back through the doorway and turn right, following the passage until you reach a staircase with two revenants at the top - climb these stairs and follow the ledge to an alcove on the left with another skull switch.

Press the switch then go back down the stairs and follow the passage until you reach an opening in the right-hand wall. Enter it and kill the waiting Hell knight, then step forward into a room with a blood pool and a switch requiring the yellow skull key. Turn left and go through a low doorway, then down a set of steps to a wooden wall - press use on the wall and it will start to lower, along with four alcoves containing a cacodemon, a pain elemental and two knights. Kill these monsters while you wait for the wooden wall to lower, then step through it to a large cavern with a blood pit - watch out for hitscanners that can shoot you from a distance in this area. Head north-west to a set of steps and climb them, then follow the path north past a junction with another staircase.

Go round the corner and follow the tunnel past some imps, then climb up the stairs in front of you and look left to see a skull switch. Press it to raise a bridge in front of you then return to the junction you passed earlier and climb the marble stairs, watching out for some imps and cacodemons that have teleported in. Cross the bridge you just raised and go up a staircase in front of you, then turn right to climb yet another staircase leading into a darker chamber holding a mancubus. Go east from here and follow a stream of blood until you reach a marble staircase, then climb these steps and go through the blocked doorway that opens in front of you. Continue following the path south until you reach a marble-brick structure, then turn left and follow the passage until you reach a cavern with a bookcase where two cacodemons and a knight will appear.

Defeat the monsters then keep following the path north-east until you reach a green brick ledge with two chaingunners. Head down the marble stairs and kill the mancubus at the bottom, then open the wooden door next to it and kill three approaching demons guarding another door. Go through this second door to see the yellow skull key sitting on a pillar surrounded by gray columns - press the three skull switches through the west, north and east archways to lower the key. Watch out for the monsters that teleport in after pressing each switch, including an arch-vile after the final switch.

Take the yellow key and leave the room, then turn right and open the yellow skull bars ahead. Go through the bars and you will see a wall lower in front of you leading back to a passage you used earlier. Enter the passage and turn right, then go into the wall opening on your right to return to the room with the switch requiring the yellow key. Press this switch to lower a wall on your right and reveal a passage containing a baron of Hell. Enter the passage and follow it (passing a knight on HMP or higher) to a room with demons and imps, then go up the steps and head forward to return to the room with the Y-shaped bridge. Go into the north-east passage to find that the metal block which barred your way has been removed, letting you reach the switch behind it.

Press the switch and kill the three shotgun guys that appear on your right, then drop off the ledge and climb the stairs by the south wall (watch out for one or two cacodemons that have been released above the blood pool). Turn right at the top of the stairs and head forward through a doorway (the switch blocking the way has lowered) then turn left and follow the ledge past two demons and a knight to a switch next to a box of shotgun shells. Press the switch then drop to the floor below and head east to a gray step, where a set of steps have risen. Climb the steps and kill the demons waiting at the top, then go into the wall opening on the left and follow the dark tunnel - watch out for two walls that lower in front of you to reveal spectres.

At the end of the tunnel is a ledge with three imps - kill them along with one or two cacodemons then go into the north-east doorway and follow the tunnel round, watching out for an ambush by two more spectres. Exit the tunnel and head west over a walkway, then enter a passage leading to a small room with a knight (or a baron on HMP) guarding a lift. Step into the lift and press the switch on the south wall to ride it down, then follow the hallway to a large red cavern - there are four switches in the cavern that need to be pressed to reach the level exit.

Pressing all four switches will raise a green brick column, letting you cross the gap in the path next to switch #4. Go down the marble steps and head through the exit door, then head south and step into the teleporter to finish the level.

Opening the wall to secret #4 also lowers the barrier blocking the north-west doorway for a few seconds; if you can get through the barrier before it rises, you can reach the switch that raises the staircase early and skip most of the level. In vanilla Doom, you will need to step round some illusio-pits containing monsters which will block your movements (the monsters are revealed by a walkover line elsewhere in the level).

At the south end of the level are three caverns with blood pits. A rocket launcher can be found on a ledge overlooking the central cavern.

After pressing the switch that raises a bridge in the west cavern, head west down some steps to a marble brick building. A berserk pack can be found on a plinth inside this building.

* The vertex count without the effect of node building is 7813.