MAP16: Toxic Traverse is the sixteenth map of Valiant. It was designed by Paul DeBruyne (skillsaw) and uses the music track "Sky Temple" by Stuart Rynn (stewboy). The par time is 6:30. 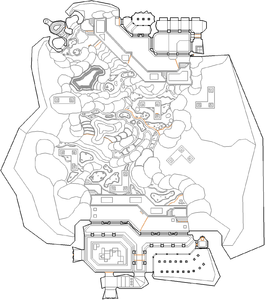 Map of Toxic Traverse
Letters in italics refer to marked spots on the map. Sector, thing, and linedef numbers in boldface are secrets which count toward the end-of-level tally.

Shoot the target switch in front of you to lower some bars then go outside to collect a super chaingun and rocket launcher, watching out for super imps and one or two pyro knights on your left. Go up the steps on the north side and kill the mancubi and arachnotrons that appear on the next level, then continue east (noting some more enemies that teleport behind you) to some more steps leading to the top floor. As you pass a tan platform with a chaingunner, the walls of the nearby building will open to reveal more imps, mancubi and arachnotrons; kill them then go into the imps' compartment to find a revenant and pyro knight guarding the red keycard.

Drop back down to the starting area and dispose of any cacodemons that have been released, then flip the switch next to the steps to lower a barrier barring your way. Go down the steps and kill some imps and revenants waiting at the bottom, then head south to a narrow pathway with zombies to your right and imps to your left. Proceed east down some more steps to a nukage pool with three metal pillars and flip the switch on the south pillar; this will raise some more steps on the south side of the nukage, but will also allow two arch-viles and some imps (or super demons on Hurt Me Plenty skill level or higher) to teleport in. Dispose of these enemies and take the megasphere by the south wall, then head up the steps you just raised.

You will reach a junction with four pathways, all of which will be blocked by various enemies; kill them then follow the eastern-most path to a clearing with a plasma gun, before walking east to the yellow keycard. Dispose of four to eight pyro knights that teleport in behind you then return to the junction and follow either of the west paths up to another clearing where mancubi, arachnotrons, imps and pyro knights can be found guarding some more pillars. Take the blue keycard sitting next to one of the pillars then head east and south to some steps that lead up to a walkway blocked by more mancubi. Follow the walkway east and west to reach a switch requiring all three keys to activate; before doing so, you will need to dispose of some suicide bombers, demons, imps and pyro knights that teleport in.

Flipping the switch will open the building behind you and reveal some arachnotrons, imps and chaingunners. Enter the building and head south down a hallway to some steps which lead up to a crate room; watch out for demons, bombers and revenants being released behind you and to your left as you enter the room. Enter the west closet that the bombers came from and flip a switch inside it, then head to the east side of the crates to find that a bridge leading to another walkway has risen. Follow this walkway to the exit door, kill one more bomber waiting behind it then step on the red X to finish the level.

When you reach the junction with four paths, take the second path from the east to find a supercharge.

* The vertex count without the effect of node building is 5601.