MAP16: Undervilla is the sixteenth map of Whispers of Satan. It was designed by Paul Corfiatis, who also wrote the music track for this level, "Nebula's Keep". 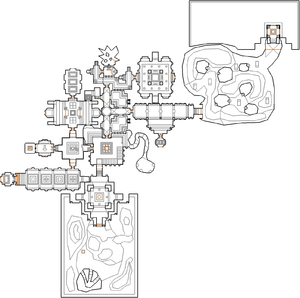 Map of Undervilla
Letters in italics refer to marked spots on the map. Sector, thing, and linedef numbers in boldface are secrets which count toward the end-of-level tally.

Enter the door at the start and grab the super shotgun. Watch out for shotgun guys who teleport, plus mancubi hiding behind the evil-looking emblems to the sides. You need to press the four switches on the sides of these emblems to proceed northward. Lower the lift into the next cavern with the fire wall and head downstairs. Go through the left door to confront a Hell knight and see the yellow skull key behind two sets of bars. Go behind it and shoot the glass to find a control room with former humans and two switches. Press on the one that the arrow is pointing to, and witness the arch-vile getting crushed. Afterwards, head back to the yellow key room to find the two side paths are open. Take the one on the right (south) to find a hallway with shotgun guys, plus another mancubus behind an evil wall. Approach the double door at the end for it to open sideways, and kill the barons of Hell guarding the switch. Hit it and take the other side path. Here, get to the middle of the walkway and shoot the two switches at the sides to open the barrier ahead. Watch out for the lost souls. Open the door, and again kill the barons and press the switch. Return to the yellow key and pick it up, then return to the cavern and take the yellow door to the north.

Behind the yellow door, head straight across to the next door, and you will reach a murky canal. Head right from here and follow the path to a door. Press the switch behind the door, but look out for imps that teleport in as well as the mancubi hiding behind the evil walls. Take the other path in the canal now to retrieve the red skull key, then backtrack to the library room that was behind the yellow door. Open the red door to the east to find a hallway, where the exit door is to the right guarded by monsters. Head straight across the hallway ignoring the door and lower the lift to the watery cavern below. Head for the northeastern end of the cavern, and approach the metal wall for it to lower and reveal the blue skull key. Be careful of extra monsters as you head back through the watery cavern to the lift. Then go through the blue exit door, kill the imps, and exit.

* The vertex count without the effect of node building is 4152.