MAP16: Wormhole is the sixteenth map of PlayStation Final Doom, and the third map of the TNT episode. It is based on the PC version of MAP04: Wormhole from TNT: Evilution, with modifications to accommodate the PlayStation's framerate and memory limitations and add enhancements such as colored lighting. It uses the music track "Corrupted Core".

The author of the original level was Ty Halderman. Changes for the PlayStation port were authored by Tim Heydelaar.[1] 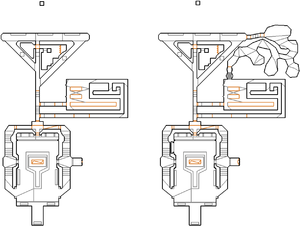 The level is divided into two halves: the starting area and the "alternate" area. It is not necessary to enter the alternate area to exit the level.

From the start, step forward then go east through a doorway flanked by floor lamps. Climb the staircase and go through the door at the top to a narrow corridor. Go west through this corridor until you hear a door opening nearby. Stop and go back the way you came, through the door and down the wide staircase. Halfway down the stairs, you will see that the east wall has opened to reveal the exit switch behind a shotgun guy, or three on Hurt Me Plenty and Ultra Violence skill levels (HMP/UV).